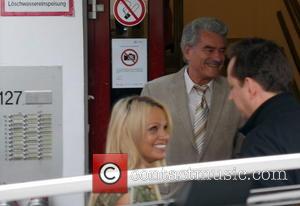 The former Baywatch babe and the rocker made the explicit tape on their honeymoon and it was stolen from their home in 1995 by an electrician.

The footage went viral and Anderson reveals late Penthouse magazine founder Bob Guccione made the couple a lucrative offer to legally purchase the tape - but they turned it down in a bid to distance themselves from the scandal.

Discussing the sex tape controversy on U.S. talk show Watch What Happens Live on Thursday (24Sep15), she said, "I made not one dollar... Neither of us made anything from it. It was stolen.

"Bob Guccione offered us millions of dollars. We said no. It was already out at that time, the damage was done. So we said, 'No way, we're not getting involved in that.'"

The then-couple subsequently filed a $10 million (£6.25 million) civil lawsuit against the handyman, but ended up dropping the legal action in a bid to move past the scandal as the busty blonde was expecting their second child.

Anderson, who insists she has never seen the raunchy tape, divorced the Motley Crue drummer in 1998 after three years of marriage. They are parents to sons Brandon, 19, and Dylan, 17.