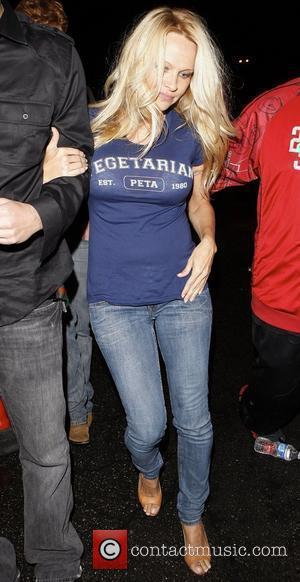 Actress Pamela Anderson has sent leaders in Israel an horrific video showing the slaughter of animals in a bid to urge them to back an anti-fur law.
The former Baywatch star is calling on the country's leaders to stop blocking legislation which could halt fur being imported into the country.
The Ultra-Orthodox parties oppose a ban because it would affect the wearing of the streimel, a fur-ringed hat traditionally worn by married men on the Sabbath and Jewish holidays.
The actress claims the use of fur "violates Jewish principles" and the blonde beauty has penned a letter to Israel's Minister of Religious Services, Yakov Margi - who has delayed legislation calling for a total ban on the fur trade - to encourage him to outlaw the practice.
Anderson says, "I urge you to support this historic bill and speak up for the millions of animals who are bludgeoned, electrocuted, and skinned alive for their pelts each year."
She also included a video of animals being killed for their furs, and added in the note: "Surely you will agree that the ways in which animals suffer and die in the fur trade violates Jewish principles, which strictly prohibit causing unnecessary suffering to animals."