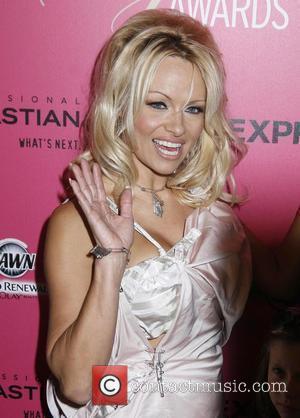 Pamela Anderson has come under fire from child protection advocates after a nine year old girl carried the train of her gown at a fashion event.
The former Baywatch actress shocked guests at the Hollywood Style Awards at the weekend (10-11Oct09) when she turned up with young Adelaide Gault, who trailed behind the star, making sure her flowing Vivienne Westwood gown didn't catch on the floor.
Gault, the daughter of a make-up artist who was said to be working at the event, was left looking embarrassed and uncomfortable as she followed the actress around, and even sat on the floor as Anderson took her seat near the catwalk.
According to reports, the audience physically gasped when Anderson took to the stage, turned to Gault and patted her leg, shouting "daughter," as if she was calling for a pet dog.
A source tells New York gossip column Page Six, "She didn't even have her own seat and had to sit at Pamela's feet, where people nearly stepped on her to get to the stage. The girl looked uncomfortable and kept tugging on her dress to get her attention, but Pamela waved her away."
Another guest adds, "Pamela was telling people it was her daughter. And, after she presented David LaChapelle with an award onstage, she shouted 'daughter' in front of the whole auditorium, and slapped her leg like she was calling a puppy. The girl rushed up to grab her train."
A spokesperson for America's Child Labor Coalition has now called for investigation into how the nine year old came to be "working" as part of the blonde bombshell's entourage.
The rep says, "I would want to speak to the child to ask her if it is something she willingly did. Nine is very young, and an awards ceremony is a long time for a child to be out holding a dress."