Paloma Faith - Do You Want The Truth Or Something Beautiful? Album Review

Review of Do You Want The Truth Or Something Beautiful? Album by Paloma Faith

Do You Want The Truth Or Something Beatuiful? is the debut album from English soulstress Paloma Faith. With obvious comparisons to Amy Winehouse and even Duffy by some, Faith was always going to need to set herself apart from her contemporaries for the critics. She more than does that on this record. 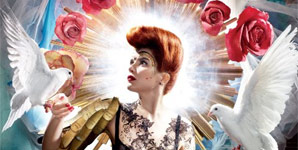 Opening with Stone Cold Sober, a retro pop gem that puts band's like the Noisettes firmly in their place the album jumps from tempo to tempo with elements of pop and jazz but keeping that smooth soul sound throughout.

Despite her very distinctive vocals, the album keeps your attention throughout with its varied tracks. The beautiful soaring epic New York with her backing singers shows a strong confident character with a voice to match. Whereas the fragile Broken Doll, where Faith sings 'I don't seem to be perfect, I know I'm damaged goods' shows us a different side of the singer. Upside Down increases the tempo as it bounces along to its jazz melody for three minutes. The album ends with two longer tracks, My Legs Are Weak and the almost choral backing singers on Play On, perhaps a little too long in comparison with the rest of the tracks but finishing with a lush display of Faith's vocal range.

The only negative thing I could find with this album is its length, a little under 40 minutes. But it is a real soul pop classic, with each track earning its place. Musically diverse and well produced; it is a polished diamond. Faith's captivating vocals and huge range keep you hooked throughout and encourage you to press repeat as soon as the album ends.