The Killers' 'Christmas in LA' video stars Owen Wilson who plays a struggling actor that misses the family holiday as he is stuck in Los Angeles in the hope of launching his career. 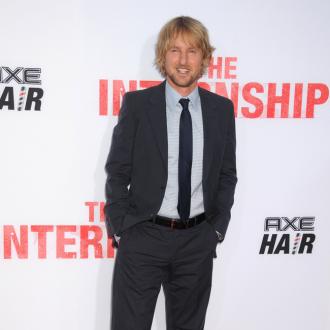 The band - which includes frontman Brandon Flowers, Ronnie Vannucci Jr., Mark Stoermer and Dave Keuning - have released a charity Christmas song on World Aids Day for the past eight years and now they've joined forces with 'The Internship' star.

Brandon told Britain's Metro newspaper: ''The song is about a struggling actor in L.A. who misses the traditional Christmas.

''You'll never see us smile or let our hair down as much as when we do the Christmas stuff. It always turns out to be a lot of work but it's really refreshing.''

The video - which was directed by Kelly Loos - begins with Owen waking up on a sunny morning in an empty room as he spends the festive holiday alone.

He opens a Christmas card sent to him by his parents and is looks glum as he plays with a silver bauble hanging on a crippled miniature Christmas tree.

He later waits in a queue of people who are auditioning for a role and the song lyrics read: ''Another Christmas in LA, another casting call on Thursday for a job that doesn't pay.''

The video features a cameo from Harry Dean Stanton as well as an animation - which begins half way through the song - featuring singer-songwriter Warren Zevon.

Proceeds from the song are going to Global Fund to Fight AIDS which is an international financing institution that fights AIDS, tuberculosis and malaria.