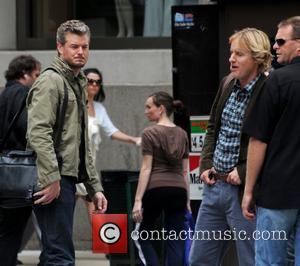 Picture: Owen Wilson and Eric Dane on the set of 'Marley and Me' Philadelphia, Pennsylvania - 14.05.08

Actor Owen Wilson was rushed to hospital in Los Angeles on Sunday (26Aug07), according to reports. The 38-year-old star was taken by ambulance from his home in Santa Monica to the emergency room at L.A's St. John's Hospital at midday. The National Enquirer and Star magazine are reporting that Wilson tried to kill himself. Sources tell the magazines he cut his wrists and took a number of pills - and was discovered by a family member, who alerted authorities. Santa Monica Police released the following statement, "On Sunday August 26th 2007 at 12:10 pm officers from the Santa Monica Police Department responded to a medical assistance call from the Santa Monica Fire Department. The person was transported to a local hospital where they are being treated." Wilson is now thought to have been transferred to another hospital in Los Angeles, where his condition has been described as stable. A representative for the actor has not been available to comment.