Owen Wilson has joked Ben Stiller gives him the cold shoulder on set if he thinks his co-star is slacking when they work together. 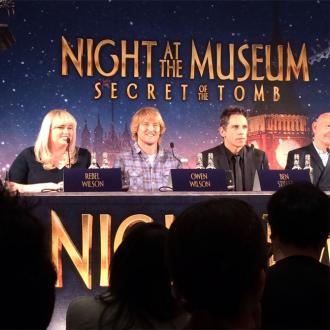 Owen Wilson says Ben Stiller behaves coldly towards him if he thinks he's coasting on set.

The two comic actors have worked together on numerous occasions and appear on screen with one another again in 'Night at the Museum: Secret of the Tomb'.

However, Owen has joked Ben isn't always impressed with his laid back and gives him the silent treatment if he jokes around too much on set.

Speaking in a 4Music movie special, Owen said: ''It's not so much tantrums that you get with Ben, it's just a real coldness - at least that I get sometimes. He is an extremely hard worker and sometimes he believes that I have a tendency to coast a little bit more than he does.''

Discussing their working relationship, he added: ''We do have conflicting styles but somehow it all works out.''

Owen, 46, and Ben, 49, previously starred together in 'Zoolander', 'Starsky & Hutch' and the other two 'Night at the Museum' films.

The pair are joined in 'NATM 3' by Rebel Wilson, Steve Coogan, Sir Ben Kingsley and the late great Robin Williams.