Gucci Mane might have spilled the beans on the first new Outkast music in 10 years...

Fans of Atlanta-based hip-hop legends Outkast were sent into a frenzy today after rapper Gucci Mane mentioned that he had recorded music with the duo, teasing the possibility of the first new music from the band in a decade.

The 36 year old star Gucci Mane, who was released from prison in May this year and hails from Atlanta too, mentioned in a Snapchat on Tuesday (September 6th) “I just did a record for Outkast”… alongside with a whole host of other names including Lil Wayne. 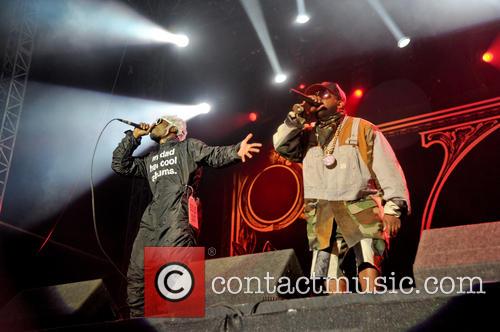 Outkast performing on their ATLiens reunion tour in 2014

It’s not entirely certain whether this was a slip of the tongue and he actually meant ‘with’ Outkast, as Gucci is due to release his own album Everybody Looking at the end of 2016 and he could mean a collaboration intended for that instead, but it’s certainly an exciting prospect.

There’s not been any new music from Outkast in nine years since ‘International Players Anthem (I Choose You)’, a collaboration with UGK, and the last album that Big Boi and Andre 3000 released together was 2006’s Idlewild, which celebrated its 10th anniversary last month. 2003’s Speakerboxxx / The Love Below, which catapulted them to international fame, was famously recorded as two solo albums housed in the same double-disc collection, meaning they have effectively operated as solo artists before.

More: Gucci Mane opens up about prison life in letter to fans [archive]

Despite a 2014 reunion for their ATLiens tour, there was no news of any new music on the horizon. However, despite branching into an acting and producing career, Andre has recently expressed an interest in getting back together to work on new material.

Andre 3000 told Billboard earlier this year: “I still get time to think about music. [Shooting TV and film projects] is not so bad — it kind of puts you in the place where you’re fiending to do music. I’ve been holding [back] for a long time, so now I’m really interested in figuring out some type of music to do.”

Big Boi, for his part, has released two solo albums since Outkast went on hiatus: Sir Lucious Left Foot: The Son of Chico Dusty in 2010 and Vicious Lies and Dangerous Rumors in 2012.