Other Lives is an American indie rock band with roots in Stillwater, Oklahoma. They are best known for their atmospheric tracks 'Tamer Animals' and 'Reconfiguration', as well their affiliation with alternative group Radiohead.

Musical career: April 7th 2009 saw the release of Other Lives' self-titled album via TBD Records. By February 2011 the band had finished constructing their third album 'Tamer Animals'. On May 10th 2011 the record came out in the USA and August 29th 2011 in UK/Europe. Received well by critics and musicians alike, Thom Yorke of Radiohead (whose work can be seen linking well to that of Other Lives') remixed the title track of the album.

The band then went on to play a series of live shows across the globe. In 2011 the group toured with S.Carey and The Rosebuds throughout the UK, and later went on to play at Iceland Airwaves festival and tour with Bon Iver in the USA and Canada in September. In October the trio supported Chapel Club in London, opened for Radiohead in 2012 for part of their North American Tour and played Coachella festival that same year.

By October 2012 Other Lives had released their EP 'Mind the Gap', and three years on their latest album 'Rituals' came out on the 5th of May 2015, which marked an evolutionary stage in the band's development and progression from lighter, folk-derivative acoustic sounds to deeper, expansive, experimental use of synthesizers, keyboards and strings.

Other Lives have also created an interactive website entitled Wirewax which got up and running in September 2011. Wirewax was based upon and constructed around the trio's music video "For 12" - the track that was credited ad KCRW's "Today's Top Tune" on October 27th, 2010 - giving users the ability to access additional audio and visual content within the video.

Over a decade on from their formation, Oklahoma-based indie rock trio Other Lives have reflected on their recent travels outside of their native land and created 'Rituals'; an album which revitalises the essence of the group whilst exploring new sounds and ideas. The album as a whole sounds alive and progressive as each track tends to vary and fluctuate in speed, tone and emotion, taking Rituals in different directions and sonically mirroring the journey the band went on when writing the new record. Trying out something more experimental with their sound has brought with it elements that are unique and different, but it's also highlighted some flaws that reflect the challenges the group now face in refining and cultivating the best of their achievements. 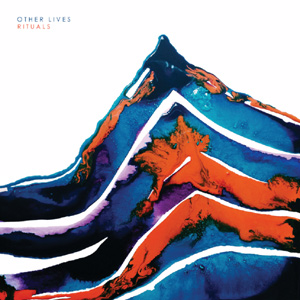 The album opens with the dark and foreboding depth of 'Fair Weather'. Frontman Jesse Tabish repeats the same line throughout in a ritualistic chant (ergo the album title), sounding like the resurrection of some old natural force gaining life as the track layers and builds in texture. Percussive elements become more rapid and snappier by 'Patterns' and start to imitate the sound of running feet as the album gains some momentum. Moods are lifted to a euphoric state as high pitched strings warm to major keys whilst Jesse's vocal range oscillates in pitch to intensify the changing sentiments of the record.

The peaks and troughs of the trio's disposition during their journey can be heard in other parts of the record too. 'Easy Way Out' is abstract and ominous, with fragmented piano chords and hypnotic xylophone patterns that follow the vocal melody in a strange setting of fatalistic dystopia - "We could find an easy way out. until it finds you", sings Tabish. 'English Summer', on the other hand, sounds far more soothing.