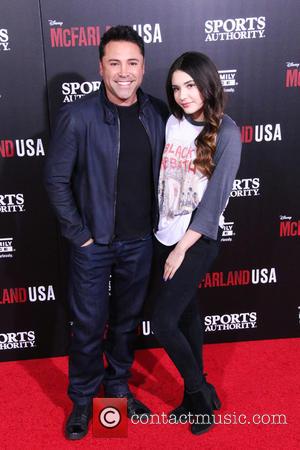 Picture: Oscar De La Hoya and Atiana De La Hoya - A host of stars were photographed as they arrived at the world premiere of Disney's...

In the film, Jake Gyllenhaal plays a boxer eager to get his life back on track after losing his wife in a tragic accident, and although de la Hoya praises the actor's commitment to the role, his transformation and acting skills, he noticed a few inaccuracies throughout the film.

In a review for The Hollywood Reporter, the Olympic gold medallist calls out the filmmakers for depicting violent boxers out of the ring and corrupt promoters - characteristics which de la Hoya insists aren't the norm in the real world of boxing.

He writes, "Ironically, it is where many boxing films like Rocky, Million Dollar Baby and others have been so successful - in the scenes that take place outside of the ring and the gym - where Southpaw ultimately lapses into stereotype and does a disservice to its audience.

"Gunplay at black tie functions; fighters unleashing uncontrollable rages at home; promoters fixing fights. Has this type of behavior (sic) reared its head in the history of our sport? At times, unfortunately, yes. Is it common? Absolutely not."

Despite his criticism, de la Hoya says he's pleased with the movie, especially since it brings boxing back to the big screen.

He continues, "However, regardless of what we in the boxing business think of the film, the good news is that Southpaw and the upcoming film, Creed - another addition to the Rocky series - are helping to bring boxing back to mainstream audiences that we need if we hope to grow the sport. And that is a great thing."