Orlando Bloom and Miranda Kerr have got married in a secret ceremony in Los Angeles and the couple are now enjoying their honeymoon. 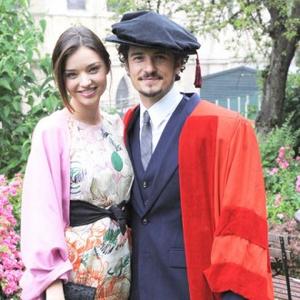 Orlando Bloom and Miranda Kerr have got married.

The couple - who have been dating since 2007 - secretly tied the knot in an "intimate" Los Angeles ceremony and they are now enjoying their honeymoon.

Model Miranda revealed the news after she had to cancel an appearance at Australian department store David Jones.

She said in a statement: "David Jones very graciously released me during this period so we could celebrate an intimate ceremony and honeymoon together. I'm very much a part of the David Jones Family and I am very committed to my role. I am enormously grateful to David Jones to have been given this time to enjoy such a special moment in my life."

The pair got engaged last month after Orlando popped the question.

Miranda had previously said she wanted to marry the heartthrob - who once dated Kate Bosworth - and have children with him, but she wasn't quite ready to make the commitment.

Speaking in 2009, the Australian beauty said: "It's definitely something, one day down the track, I want. But for now, I'm happy. I'm just too busy with work that I can't be thinking of that right now."