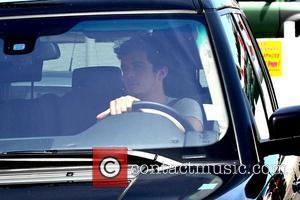 Picture: Orlando Bloom drove his car to the back entrance of M Cafe in West Hollywood to pick up his wife Los Angeles, California - 03.06.11

Orlando Bloom's hopes of romance during a trip to Thailand were dashed when his roommate Billy Boyd was struck down with food poisoning.
The British actor and his fellow Lord of the Rings stars Boyd and Dominic Monaghan were on a break in the Far East when Boyd fell ill after eating raw shrimp.
But it was Bloom who suffered the most from the incident - his date deserted him when she realised he was sharing a room with his sickly pal.
Monaghan told fans at the Comic-Con event in California, "We decided to rent a kayak for the day and go paddling over to this island with a restaurant on it. There's this dish which is raw shrimp in chilli oil, super hot, so we order it.
"(Boyd) got the s**ts as soon as we got back on the boat. He ran to his room when we returned to the hotel. Billy puts the key in the door, runs into the toilet and is like: 'Arghh, oohhh, eurgghhh.' Poor Orlando's date left pretty quickly after that."
Bloom is now married to supermodel Miranda Kerr.