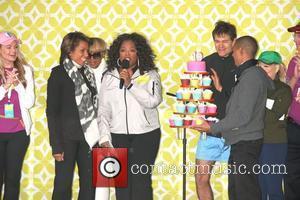 Oprah Winfrey has visited Michael Jackson's family at their home in Los Angeles for an exclusive interview that will be aired on the host's show next Monday (8th November 2010). However, she has angered Randy Jackson, who says she is the "last person" Michael would have wanted around his children.
56-year-old Winfrey arrived in California to interview Katherine Jackson, the matriarch of the family, but Michael's children Prince Michael, Paris, and Blanket, also appeared in the filming and could be seen laughing and joking in the garden with their grandfather Joe Jackson, reports the UK's Daily Mirror. Katherine has rarely spoken since her son's sudden death in June 2009, so it comes as a surprise that she openly discussed the singer's childhood and his children in the exclusive interview.
Michael's brother RANDY JACKSON did not attend the interview, and he has publically criticised Oprah for wanting to speak with the family. The UK's Daily Telegraph report how he said his 'stomach ached', when he learned that the queen of daytime television would be visiting the house, and speaking on his Twitter page, Randy said, "I know there are a lot of you out there upset and angry over this. I don't blame you. Can you imagine how I feel? I'm angry too."