Only Real AKA Niall Galvin used to make music on a battered laptop in the West London suburbs and, like many  bedroom aesthetes, he worked with what he had, producing functional yet appealing songs that he's affectionately unafraid to have described as "Ramshackle". To an extent, riding the tails of Rizzle Kicks' Year 11 brat-rap, the contents of Galvin's début EP 'Days In The City' was just as pop, but in a looser, less calculated way than the Brighton duo. Now signed to Virgin, 'Jerk At The End Of The Line' was part recorded in far off Atlanta and was helmed by the sometime Hot Chip, Sia and Franz Ferdinand big-hitting collaborator Dan Carey, along with some game changing lessons Galvin ruefully admitted in a recent interview on "Real drum machines". 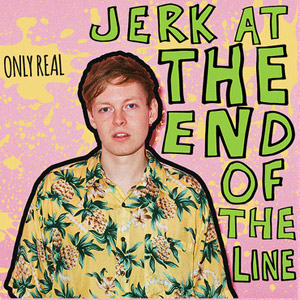 Any expectations you may have had about this professional company spoiling the rampant adolescent streak in Galvin's nature are gleefully despatched about ten seconds into opener 'Intro (Twist It Up)', on which his voice is morphed into a ridiculous helium sounding parody. That he feels confident enough to ridicule himself before we've even started plays much to an ambience that's straightforward but never far from the money in terms of big choruses: all these songs want to be in reality is loved, scolded or forgiven.

Fans from the beginning will be pleased to know that despite all of the expensive knob twiddling, songs like 'Yesterdays' and 'Pass The Pain' still employ a guitar line rooted in sky scraping reverb and some basic beats, alongside a vocal delivery somewhere between rapping and reading the ingredients of a pot noodle after a heavy night. This naivety is in fact the "realness" of Galvin's adopted moniker: in true punk style you feel that 95% of people on the street could come up with something as rudimentary as 'Backseat Kissers', given a couple of days training.

So much for lo-tech giving everyone their fifteen minutes of fame, but there's a lot more to 'Jerk At The End Of The Line' than its egalitarian cultural start up costs. It's obvious to dial up people like Jamie T as antecedents, but Galvin's ear for a tune amongst the diffidence is a gift that helps him carve his own niche. He's also keeping good company: much of the scally jangle he evokes was the kind of thing the pre-crack Happy Mondays burped out, a quality reproduced on the likes of 'Can't Get Happy' and 'Blood Carpet' which launched a thousand provincial imitators in an era when slacking was still a long term career option. True, Galvin sounds less pharmaceutically impinged than the urchin Shaun Ryder - circa "Bummed" - and the songs here lack the bass whump of his brother Paul - but the melon-twisting of 'Break It Off' bears a random strain of their much-spread DNA.

The Only Real Facebook page describes this simply as "Baby music for babies". On the final track, 'When This Begins', however, a sobered sounding Galvin remorsefully croons "Guess I'm all grown up", presumably thinking solemnly about giving up Haribo and leaving Tinder. Stranded somewhere in his in-between days, the 'Jerk' of the title is stuck in a groovy rut, one that you hope he doesn't plan to escape any time soon.

Only Real - Can't Get Happy Video

Only Real - Pass The Pain Video