'Drag Me Down' appeared early on Friday morning, and with no radio airplay or promotion ahead of its release, it still reached the top of the iTunes and Spotify charts in double-quick time.

Just a day after Zayn Malik said that he had left them to make “#realmusic”, One Direction are showing that life continues without him as they dropped their first single as a quartet on Friday morning, entitled ‘Drag Me Down’.

The single made a surprise appearance on the iTunes store and Spotify at around 6:30am on Friday (July 31st), followed by its radio debut on BBC Radio 1 a couple of hours later. 1D’s Liam Payne also tweeted a link to the iTunes store, saying “Bit of a surprise! Check out our new single! It’s called ‘Drag Me Down’ & I hope you love it as much as we do.” 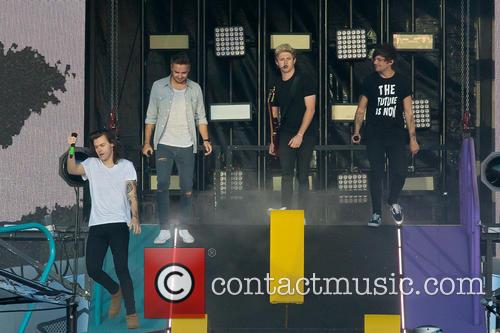 One Direction in Sweden

Early reception has been mostly positive, with many noting a shift away from the sugary arena pop that made them so famous towards a moodier atmosphere. Zayn Malik’s high register voice has obviously gone, leaving Harry Styles with the biggest range and taking on the duties that the ex-Directioner would have fulfilled.

It’s apparently the first track to be taken from their upcoming fifth album, which the band recently said was nearly complete. Louis Tomlinson also took to social media, writing: “We wanted you guys to have our new single first so here it is! Thank you for all your constant support. Hopefully you love it, we're proud of it.”

Within an hour of its release, ‘Drag Me Down’ had already reached the top of the iTunes and Spotify charts, despite being given no official promotion. As such, it is eligible to enter the next Top 40 singles chart, announced later on Friday.

Yesterday, Zayn stole the headlines by signing a record deal for his solo career with RCA, having been released by 1D’s record label Syco (owned by Simon Cowell) earlier this week. He had quit the hugely popular group back in March, citing exhaustion with constant touring and wanting to be a “normal 22 year old”.