One Direction were the big winners at the Teen Choice Awards, picking up eight awards despite the fact they couldn't attend the Los Angeles ceremony. 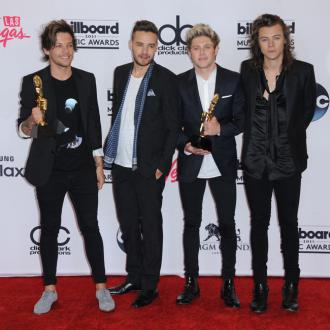 One Direction were the big winners at the Teen Choice Awards.

The four-piece band swept the board by picking up eight awards at the ceremony, including the Choice Music Single from a group with 'Steal My Girl' and Choice Summer Tour for their worldwide 'On the Road Again' string of shows.

Niall Horan, Harry Styles, Liam Payne and Louis Tomlinson were unable to attend the event at the Galen Theater in Los Angeles, but sent a video message to thank their fans for voting for them to win.

Elsewhere at the ceremony, which was attended by stars including Britney Spears, Vin Diesel and Rita Ora, there were prizes for Cara Delevingne who won the Choice Movie Breakout Star and Choice Summer Female Movie Star awards for 'Paper Towns', which was named Choice Summer Movie.

Performers at the event included 5 Seconds of Summer, Rachel Platten, Flo Rida, Robin Thicke and Little Mix, the latter of which picked up the Choice Music Breakout Artist prize, which they gushed about on Instagram.

They wrote: ''Oh my gosh! We can't get over these past few days. Too much excitement! Can't believe we've just performed at #TCA's and won an award!! You mixers are insane and we can't thank you enough for your support! We just bloody adore you! The girls! (sic)''