One Direction are hoping to meet Pink and Green Day, who will perform alongside them at the MTV Video Music Awards (VMAs) tonight (06.09.12). 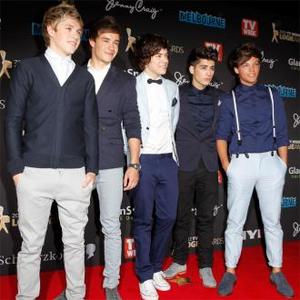 One Direction are hoping to meet Pink and Green Day at the MTV Video Music Awards (VMAs) tonight (06.09.12).

The British boy band are performing at the music channel's prestigious award ceremony in Los Angeles later, and can't wait to meet some of their idols at the show.

Niall Horan told MTV: ''We're excited to see Green Day because growing up Green Day were like one of the big bands around of our generation. It'd be exciting to meet them.''

Speaking about loudmouth Pink, he added: ''I think it'd be nice to meet her because she kind of does her own thing.

''It's going to be nerve-racking, but we're trying to do our best.''

Niall's bandmate, Liam Payne added, ''I want to meet Jay-Z,'' while Zayn Malik is going to be looking for tips from rising star Frank Ocean.

He said: ''Frank Ocean's performing. I'm excited to see that.''

However, Louis Tomlinson - who completes the band alongside Harry Styles - has his mind on other things.

When asked who he'd most like to meet, the cheeky star replied: ''All the single ladies? I think it'd be nice to see Katy Perry again. We've seen her a few times now.''

The awards will be broadcast live on MTV in the US at 20:00 Pacific Time.