One Direction Top Us Album Charts

One Direction have become the first British group to enter the US Billboard 200 chart at number one with their debut album 'Up All Night'. 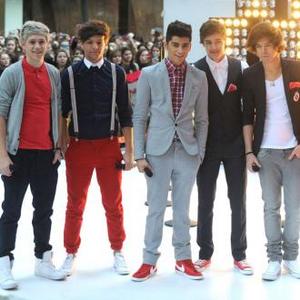 One Direction have become the first British group to enter the US charts at number one with a debut album.

The 'What Makes You Beautiful' hitmakers - Niall Horan, Zayn Malik, Liam Payne, Harry Styles and Louis Tomlinson - made history by selling more than 176,000 copies of their 'Up All Night' album since its release last Tuesday (13.03.12).

Harry said: ''We simply cannot believe that we are number one In America! It's beyond a dream come true for us. We want to thank each and every one of our fans in the US who bought our album and we would also like to thank the American public for being so supportive of us.''

Niall added: ''As you can imagine, we are over the moon! When we got put together as a group, we couldn't imagine ourselves Coming To America, let alone releasing our album here, so for us to be sitting at the top of the US album charts is unbelievable. We are so grateful to everyone who has supported us in the US.''

The group shot to fame when they finished third on Simon Cowell's 'x factor' in 2010, and the music mogul ''couldn't be happier'' for the boy band's global success.

Simon - who signed One Direction to his Syco record label last year - said: ''I couldn't be happier for One Direction, it is an incredible achievement. They deserve it. They have the best fans in the world.''

Later this month, the group - whose debut single 'What Makes You Beautiful' was a number one hit in the UK charts - will perform the song at the Nickelodeon Kids Choice Awards, and the band will be guests on iconic US comedy show 'Saturday Night Live' when it is hosted by Sofia Vergara.