One Direction are recording the follow up to their debut album 'Up All Night' in Stockholm, Sweden. 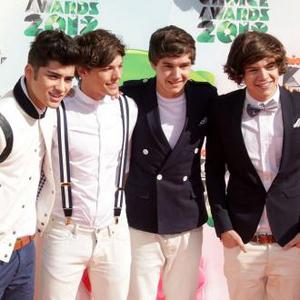 One Direction are recording their second album.

The boy band have recently taken America by storm and scored a number album with debut 'Up All Night,' and even though it only came out in November last year are already working on the follow up.

The 'What Makes You Beautiful' hitmakers were given just 10 days off before heading back to the studio in Stockholm, Sweden.

Band member Niall Horan tweeted: ''great day soo far in the studio!! Got some crackin tunes on the way!.. its been a while since we've been in the studio.. great t be back (sic).''

The group are hoping to build on the success of their first album, which was also recorded in Sweden with a number of different producers.

Zayn Malik, Niall Horan, Louis Tomlinson, Harry Styles and Liam Payne have had huge success since coming third in The X Factor in 2010 and later this year they will be touring America and there are also plans in the pipeline to do a European tour next year.

Harry tweeted: ''Just been looking at the diary, we're working out the dates to bring our tour to you in Europe in 2013:) (sic).''