One Direction Proud To Be Record Breakers

One Direction are ''incredibly proud'' to be record breakers after entering the Guinness World Records of 2013 for being the first British group to debut at number one In America with their first album. 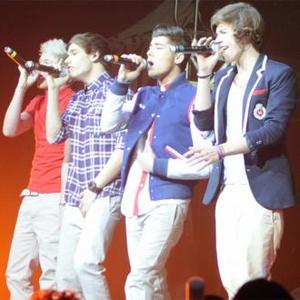 One Direction are ''incredibly proud'' to be record breakers.

The boy band have entered the Guinness World Records of 2013 for being the first UK group to reach number one In America with a debut album, with their LP 'Up All Night' bettering the 1997 achievement of the Spice Girls, who previously held the record for highest entry into the US album chart by a British group when 'Spice' entered at Number six.

One Direction said: ''Being the first British band to debut at number one in America with a debut album is something that we would have never even have dreamt of. We are incredibly proud to have this achievement included in the Guinness World Records book.''

The pregnant star also had entries as the first female, the first UK artist and the fastest musician to reach digital sales of one million in the US within five months of her album's launch.

'Rolling in the Deep' was the biggest-selling digital track in a calendar year in America after it was downloaded 5.81 million times in 2011.

Late singer Whitney Houston ousted deceased Amy Winehouse to have the most simultaneous hits on the UK singles chart by a solo female with 12 new entries in the chart following her death in February.

PJ Harvey became the first artist to win the Mercury Prize twice and The Stone Roses' reunion shows were the fastest-selling rock concerts in UK history with all 220,000 tickets selling-out in just 68 minutes.

The new Guinness World Records 2013 edition is available from September 13.