One Direction like it when their fans throw their underwear at them at their concerts. 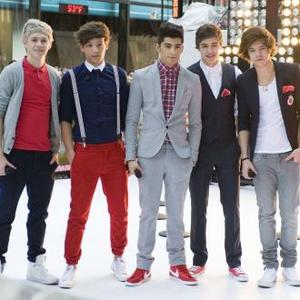 The 'One Thing' hitmakers - which are comprised of Harry Styles, 18, Zayn Malik, 19, Liam Payne, 18, Niall Horan, 18, and Louis Tomlinson, 20 - have admitted they like female fans throwing their underwear at them on stage, but claim they can be a health hazard.

Harry wasn't too worried, however, as he quipped: ''I like knickers''.

The boy band - who were formed by Simon Cowell on 'The X Factor' in 2010 - are accustomed to bizarre behaviour from their fans but they still sometimes get shocked by their obsessive antics.

Louis recounted to Britain's OK! magazine: ''In Italy, there was a girl who recognised us and we had a picture taken with her. Then out of pure randomness I decided to splat my ice-cream on her face - and she kept it there.

''I saw her two hours later at our signing and she still hadn't wiped it off!''