One Direction For 'The Monkees' Style Nickelodeon Show? 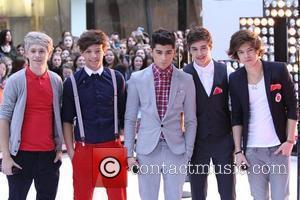 One Direction have played down talk they are set to star in their own television show on Nickelodeon. The British boy-band, who became the first UK group to top the Billboard Albums Chart with a debut release, have been rumored to continue their rise to fame with a weekly show on the kids channel.
Of course, such a project would echo the famous show featuring The Monkees in the 1960's and 1970's, and both groups were in effect manufactured by label bosses. Simon Cowell personally handpicked the One Direction boys after they auditioned separately on his X Factor show. However, speaking on In Demand radio in the U.S, singer Louis Tomlinson cleared up where the rumors may have originated, saying, "I think there must have been some misunderstanding. We are doing the Nickelodeon Kids Choice Awards, but as far as a TV show goes we haven't sat down and had that conversation". The debut album Up All Night sold 179,000 copies during its first week of release in the United States to topple Bruce Springsteen at the top of the chart. When pushed on whether he and the boys would be interested in a television show, Louis said, "To be honest, if it was up to me personally; I just want to focus on the music for now".
Fresh from their chart success, One Direction have announced their first major tour in the U.S and will call at venues in Chicago, Las Vegas and New York.