One Direction are headed for the top in the UK, whereas they're set to lose out to Bieber in the US.

One Direction have their noses ahead of Justin Bieber in the biggest sales race in years, as the midweek albums chart puts the British boyband ahead of the Canadian superstar in the UK.

Made In The A.M., the Directioners’ fifth album and their last before their much-mourned hiatus, is ahead of Justin Bieber’s fourth LP Purpose, selling 14,000 more copies in combined sales than the Biebs according to the Official Charts Company, ahead of the final result on Friday (November 20th).

However, over on the singles chart, Bieber may well end up on top with his new single ‘Sorry’ currently leading Adele’s ‘Hello’ with a slim lead of just 150 copies. 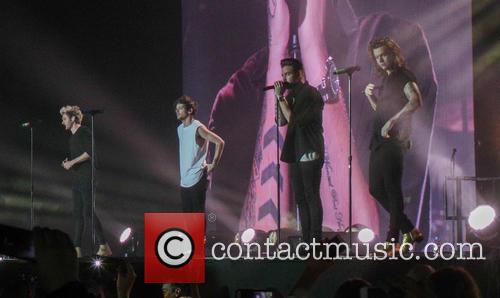 One Direction in concert at Sheffield

Whoever wins the battle had better be prepared for a one-week stay only, as the British songstress prepares to unleash her long-awaited third album 25. It’s projected to sell over one million copies in its first week, and could well shift even more than that.

The story is quite the reverse in the United States, though, with Bieber well ahead of 1D by nearly 50,000 sales, according to Billboard. Both albums are on course for opening week sales figures of over half a million copies, which would constitute the biggest first week sales since Drake’s If You’re Reading This It’s Too Late back in January.

It would also be the first time in nearly six years that two albums notched up sales of over 400,000 in the same week, when Susan Boyle’s I Dreamed a Dream and Alicia Keys’ The Element of Freedom both did so in December 2009. Over the weekend, just a day after Purpose’s release, Bieber unleashed a total of 13 music videos on the same day, one to accompany each of the tracks on the new album, which played back-to-back form a short movie called Purpose: The Movement.

Having received decent reviews, even from publications that usually turn their noses up at mainstream pop, the excellent marketing strategy seems to be working for Bieber, who has been trying to reverse his controversial image over the past year. 52 other territories around the world place Purpose on top of their national iTunes charts.

More: Zayn Malik opens up about One Direction exit in first solo interview