1D's leader is looking forward to the band's North American tour, which starts on July 9th.

Ahead of their North American tour, Harry Styles has claimed that the new One Direction shows have been “some of the best we’ve had” and that the group has not been knocked off its stride despite Zayn Malik’s highly publicised departure earlier this year.

Styles was speaking to Entertainment Weekly ahead of the latest leg of their ‘On The Road… Again’ tour kicking off in San Diego on July 9th. The massive stadium tour has suffered from a dip in ticket sales, but that hasn't affected the band's mindset at all. 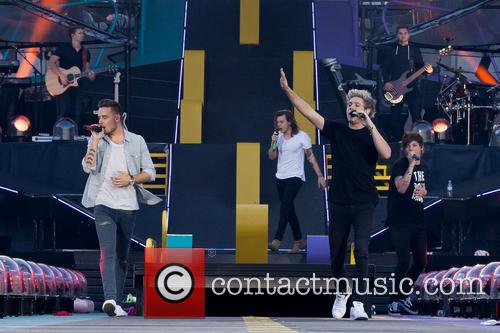 One Direction performing in Sweden in 2015

“There have been incredible shows across Europe, some of the best we’ve had!” he said on Friday (July 3rd) to the publication. “So we’re super excited about coming to America.”

The 21 year old heartthrob singer was also asked about what audiences could expect now that Malik had left, and what aspects of their live show had to be changed in his absence. “The only changes have been that the parts Zayn sang have been picked up by different people. Other than that, the shows have been going absolutely great.”

Malik quit 1D back in March this year, citing exhaustion from the band’s constant touring schedule and claiming that he simply wanted to be a “normal 22 year old”.

Zayn’s high notes on their singles ‘Story of My Life’ will be one song that fans will be concerned about the rest of the group performing, but Harry insisted they’ve got it under control. “It would be pretty devastating if we took that song out. Liam [Payne] stepped up to do the high notes. He kicks them in the b******s every show. He doesn’t hold back.”

It emerged in June that One Direction’s management had been coming up with a number of promotions to address lower than expected ticket sales ahead of the tour. One deal consisted of a ‘buy two get two free’ aspect.

Styles also teased some details about their forthcoming fifth album: “It carries a slightly new identity, but I think it’s an obvious change from [Four] in a positive way. We’ve branched out and worked with different writers, and we’ve got some great songs!”

More: Zayn Malik not returning to One Direction despite conspiracy theories doing the rounds