Are One Direction 'Pimping Islam' On Young Fans? 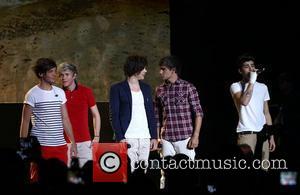 Chart topping boy-band One Direction has been accused of "inciting jihad" on their young female followers. Specifically, right wing blogger Debbie Schlussel accuses the group's Yorkshire-born singer Zayn Malik of "pimping Islam" to the group's fans.
Schlussel warned parents to "keep their daughters away" from the teen singer, whose band has been spending plenty of time in the United States following their Billboard Chart success earlier this year. The blogger added that the 19-year-old pop-star posts tweets about Ramadan and Allah, explaining, "The scary thing is that millions of girls in America and around the world are infatuated with the members of One Direction, including Malik.He knows the power he has over these mindless girls and is using that influence to preach the Islamic faith. It's dangerous", adding, "With the boy band One Direction, it's all about pimping Islam amid the deceptive visage of angelic, effeminate boys in a band". Screenwriter and journalist Wajahat Ali has already hit back at the wild statement, saying, "What we have seen in the last 10 years is that you can be an artist who is Muslim and can be practicing and doing art that is inspired by your beliefs, but does not have to be overtly Islamic or using religious language".
Schlussel claims to have received death threats and "the most vile anti-Semitic attacks" from Muslims, as well as receiving "Obscenity-laden" tweets from Malik's parents.