Review of Midnight Memories Album by One Direction

With three albums in two years, you can't fault the One Direction boys and the team working behind them for their productivity. That kind of efficiency is hardly seen in the music world today, what with touring taking up so much of an artist's time and marketing being relied on more than ever, and in these two short years the 1D boys and their legions of (mostly) young female fans have grown up somewhat. On 'Midnight Memories', Harry, Louis, Zayn, Niall and Liam try their best to show just how much they've grown up, incorporating more 'rockier' elements to their sound and even going acoustic and tender on a few others. 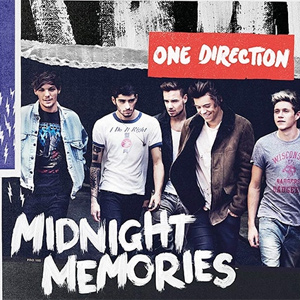 They've been picking up influences from whatever has been hot in the past year or so, taking ideas from Mumford and Sons, The Lumineers, Ed Sheeran and so forth. On their ever-so-slightly rocky parts, the band seem to have been taking influences from the pop rock heyday of the '80s, with Bon Jovi, Def Leppard and all those other bands your dad embarrassingly still listens to. Should they ever try to emulate any half decent artists, then their output might improve somewhat, but instead it continues to circle the drain of abysmal trite we've been subjected to since 'Up All Night'. Regardless of any changes made to their sound, if you didn't like 1D before 'Midnight Memories' then you're not going to like them now either, but at least the boys are taking some chances, no matter how small.

The album kicks off with 'Best Song Ever', which sticks to the power pop formula that lasted them so well over the course of 'Up All Night' and 'Take Me Home'. It's brash, cheesy and not nearly as good as 'That's What Makes You Beautiful' (admit it, it is a banger), but it also serves as a potential farewell to what has become their trademark sound. Everything gets a bit more Busted (or should that be McBusted now) from here on in, with a few asides for some more tender moments. The pace slows down dramatically for the ballad-y 'Story of My Life', with the boys each trying out their most contemplative personas for this number. 'You & I' is another quieted moment, one that doesn't even feature an anthemic chorus. It is here where the boys have actually made some steps away from their safe zone, even if it does contain a typically power pop chorus, in this pensive, acoustic number. Baby steps, but steps nonetheless.

Aside from their occasional balladry, the group try to reassert themselves with some guitars and even get a bit mischievous with their lyrics; "Same ol' sh**, but a different day" one boy sings on the title track, and again on 'Little Black Dress' where the boys ask in the chorus, "I wanna see the way you move for me, baby!"

Their lyrics seem to be slowly changing from the ever-so-faithful boyfriend of the year material of yore to the boys stood in the corner of a bar, eyebrows cocked and with an empty spot in bed waiting for whatever lucky lady is chosen to show off her "moves". They're old enough to sing about these things now, you know!

For all the stick they get and will no doubt keep on getting until they embark on their (more than likely) disastrous solo or acting careers, there are so many other acts out there that are much worse than this. The lyrics might have gotten a little more sultry, but stack that up against what Nicki Minaj or Lady Gaga are teaching young girls about then this is practically still Yo Gabba Gabba hour.

This isn't a good album by any means, but it isn't an album that's particularly excruciating to listen to either. One Direction aren't going to last forever, so at least they're trying to make their stay in the music biz a little more bearable, even if they're failing to make anything half decent. The worse case scenario for 'Midnight Memories' was that the band would adopt an in-your-face dance-pop sound similar to whatever Will.i.am or Dr Luke are making. Thankfully, this wasn't the case.