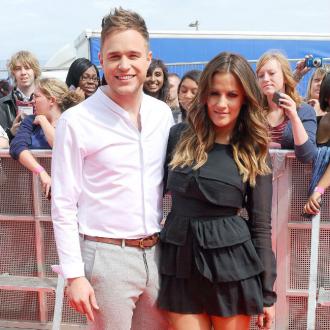 The 30-year-old singer has been trying to shed a few pounds and took the advice of his friend and TV host, who advised him to try the Soulmate food delivery diet.

Olly explained: ''I eat massive portions and I wanted to control it so I could lose a bit of weight.

''I'm doing the Soulmate food delivery diet. I heard about it through Caroline, actually.

''I think the missus was a little bit worried I was losing this weight. She's been stuffing me up for the last two years! But I've got to look good for the ladies.''

Meanwhile, Olly also admitted he opted to not have any female dancers on his tour because he risked upsetting his girlfriend Francesca Thomas, who he's been dating for two years.

He said: ''We didn't have any dancers on the tour. She wouldn't have been happy with that!''

The former 'X Factor' star also confessed his tour with be tinged with sadness following the death of his grandmother, who died three weeks ago.

Olly said every time he performs his 2012 hit 'Dear Darlin' he thinks of her.

He explained to The Sun newspaper: ''My nan passed away three weeks ago. I was in America.

''She was my dad's mum, so obviously it's really sad for us as a family. When I sing 'Dear Darlin' it just makes me think of people I've had in my life.''