Olivia Wilde is proud to be a new mother and she wasn't afraid to show this off in a recent photo-shoot for Glamour's September issue. The 30 year-old actress posed with her 3 month-old son, Otis, while breastfeeding.

The brunette beauty is featured sat in a booth at a diner, sporting a Roberto Cavalli dress, Prada heels and a Prada scarf, and with her right breast visible, she looks at her naked newborn lovingly while nursing him.

More: Olivia Wilde Claimed Her Baby Bump Is A "Badge of Honor"

"Being shot with Otis is so perfect because any portrait of me right now isn't complete without my identity as a mother being a part of that. Breastfeeding is the most natural thing," Wilde said about the statement-making photo.

"I don't know. Now it feels like Otis should always be on my breast. It felt like we were capturing that multifaceted woman we've been discussing-that we know we can be. You can be someone who is at once maternal and professional and sexy and self-possessed," she continued.

However, Jason Sudeikis's fiancé did admit that the magazine made her look a lot more glamorous in the snap than she usually would while feeding Otis.

"I certainly don't really look like that when I'm [typically] breast-feeding," she said. "And there's usually a diaper involved." 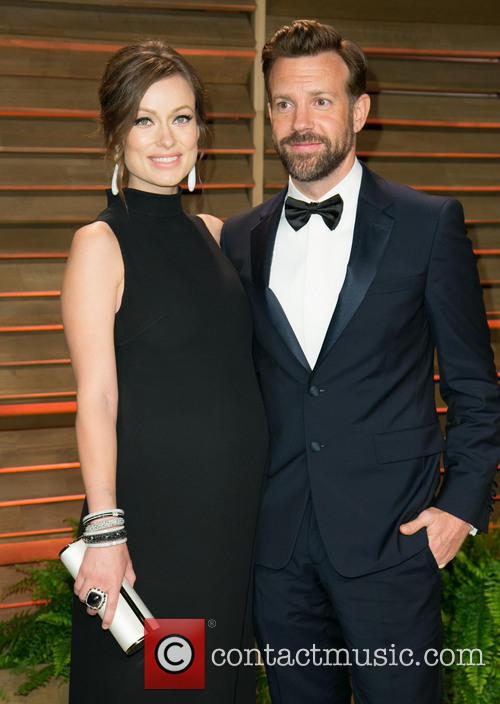 Wilde and Sudeikis became first-time parents back in April

But becoming a mother is obviously very time consuming, and therefore Wilde hasn't found time to even think about planning a wedding with Sudeikis, who proposed to her in January 2013.

"We're engaged, but no specific plans yet-we just have to find the time to put it together. In many ways, a child is more of a commitment, we are fully committed and really happy as a family," she said. "There's no definition of the 'normal family' anymore. Kids today are growing up with so many different definitions of family. I guess what I'm saying is that I don't feel any pressure to do it. But I think it will be really fun."