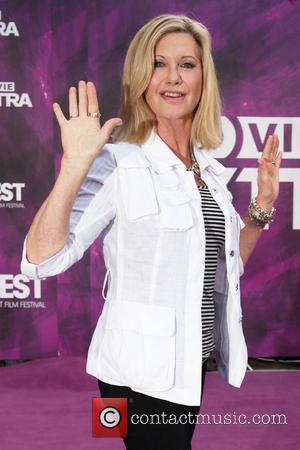 Olivia Newton-John's daughter has come under attack from activists at an Australian parents group for graphically depicting self-harm in her new music video.
Chloe Lattanzi has caused controversy with an online promo for Play With Me, in which the 25 year old sits in a bath full of electrical appliances with scalds on her arms.
Lattanzi is also seen holding a gun to her head, snorting lines of white powder and dragging a knife across her arms in other scenes.
The video, which features a warning that it is "intended for entertainment purposes only", has sparked fury among officials at the Australian Council for Children and the Media, who have accused the wannabe pop star of glorifying "harmful behaviours".
President Elizabeth Handsley tells the Sydney Morning Herald, "I think it's sad that this young woman has such a need for attention that she needs to push the envelope of good taste and appropriateness this far...
"This simply glamorises a range of harmful behaviours and does nothing to help empower young people to cope (with) relationship problems."
But Lattanzi has defended the music video, insisting it is her duty as an entertainer to "challenge ideas".
In a message posted on YouTube.com, she says, "It's purely just for artistic value. I don't want to kill myself, I don't want to die, I don't want to kill anybody, I don't want anyone to die, it's all just in the name of fun. Some people are taking it a little bit too seriously and getting all preachy and all this bulls**t. But it is an artist's job to challenge ideas. I have a lot of gratitude, though, for your attention to me. Bring on the negativity because I am a good person."