Olivia Munn's new boyfriend, Aaron Rodgers, admits they are ''very happy'' together and insists he doesn't mind the attention their relationship is attracting. 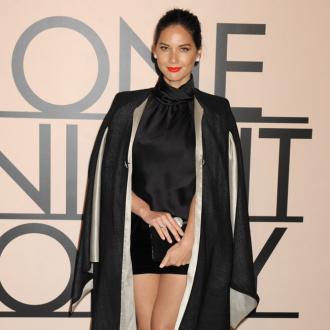 Olivia Munn's new boyfriend says they are ''very happy'' together.

The 'Newsroom' actress, who recently split from 'RoboCop' actor Joel Kinnaman after two years together, started dating Aaron Rodgers last month and he doesn't mind the attention their relationship is attracting.

Asked if he was upset about photographs of them kissing appearing online, the 30-year-old Green Bay Packers player told ESPN Wisconsin radio: ''No. For one, I'm real happy in my relationship. And I understand what comes with it. And two, the last couple years I've learned a lot about perspective and what's important. And, that you cannot, when you've had success individually and collectively as a team and you are highlighted for the things you've done on the field and off the field, you cannot hide from the spotlight. You have to learn to embrace it.''

Olivia has yet to comment on their romance, but claimed she didn't know how to define ''love'' in a video interview with Vogue.com on Wednesday (11.06.14).

The 33-year-old actress said: ''What is love? Ha, that's a huge, loaded question that I do not know the answer to. So if you find out, please DM me and let me know.''

But when asked what she is most excited about in her life at the moment, she replied: ''Everything.''

The new couple were first photographed hanging out at 49th Annual Academy of Country Music Awards in Las Vegas in April, after they spoke on stage together.

News of Olivia and Joel's breakup only became public in May, but sources previously confirmed they broke up ''a few months ago'' after their globe-trotting careers put a strain on their romance and they are still good friends.