Sophie has spent her life alone. She lives in an orphanage full of girls just like her. Each night the girls tell tales of the witching hour when the boogieman comes to visit and children go missing, Sophie's friends believe the witching hour is at midnight but little Sophie doesn't agree, she thinks the hour is much later, at 3am when only Sophie remains awake.

One night, whilst Sophie is reading, she hears an almighty rumble from outside and cannot help but open the window and look to see what's there; what she finds will change the lives of many forever.

The BFG is the much loved Roald Dahl book which was originally published by the author in 1982. The book was later turned into an animated film which featured David Jason as the voice of The BFG.

Vin Diesel makes a bid for yet another franchise with a supernatural action romp that's both deeply ridiculous and enjoyably entertaining. The premise is basically Underworld with witches, and Diesel uses his meathead charm to coast through his role as an immortal warrior. Thankfully, the crazed production design and some solid costars do most of the acting for him. And director Breck Eisner keeps the pace snappy enough to hold the audience's interest, even if we're laughing at it rather than with it.

Diesel plays Kaulder, who in the 13th century killed a nefarious witch queen (Julie Engelbrecht) and was cursed with immortality. Now 800 years later, he's living the high life in Manhattan and leading the Axe and Cross to contain the world's witch population. His assistant is the 36th Dolan (Michael Caine), who has just named the 37th (Elijah Wood) when they're attacked by the mysterious Belial (Olaf Darri Olafsson). He's determined to resurrect the queen and return humanity to the dark ages. So Kaulder sets out to stop him, teaming up with helpful witch Chloe (Rose Leslie), who has some special abilities that aid them as things get increasingly crazed.

Kaulder is an immortal witch hunter, the last of his kind having been cursed with eternal life by his foe the Queen Witch centuries earlier. There was once a time where witches ran afoul of the entire Earth, bringing with them a destructive plague to exterminate humanity. After Kaulder's explosive victory, however, the world was a little safer. Now living in New York - miserable and lonely, while his deceased wife and child are worlds away in the afterlife - Kaulder discovers that it's not over yet. The Queen Witch has returned with a vengeance, but this time it's going to take more than a witch killer to take her out. In order to slay her, you've got to be like her, and so Kaulder must unite with a beautiful young sorceress with the ability to destroy her - even if it's against his better judgement.

A Walk Among The Tombstones Review

Although the plot isn't particularly original, a darkly internalised tone makes this low-key thriller oddly compelling. It may be the usual serial killer nastiness, but it also pays attention to earthier themes like morality and the futility of revenge. Meanwhile, Liam Neeson is able to combine his more recent action-hero persona with his serious acting chops this time. And writer-director Scott Frank infuses the film with moody grit, quietly subverting each cliche of the genre.

The action picks up eight years after Matt (Neeson) stopped drinking and quit the police force, following a shootout that went horribly wrong. It's now 1999, and New York is in the grip of Y2K paranoia. Matt is working as an unlicensed private detective who uses word-of-mouth to find clients. So Matt is intrigued when one of his 12-step friends (Boyd Holbrook) introduces his brother Kenny (Dan Stevens), a wealthy drug trafficker whose wife was kidnapped and then murdered even though he paid the ransom. As Matt digs into the case, he realises that the two killers (David Harbour and Adam David Thompson) have a left a string of similar victims in their wake, and that the murders are connected. Meanwhile, Matt takes in homeless teen TJ (Brian "Astro" Bradley), an observant kid who helps him work piece together the clues. And together they try to figure out where the killers will strike next.

This story unfolds with a remarkably gloomy tone, combining horrific violence with introspective drama. This mixture can feel rather jarring, especially as it wallows in the nastier side of human existence. Every character is tortured in more ways than one, with lost loves, physical afflictions and internal demons. Even the smaller side roles are packed with detail, including Olafur Darri Olafsson's creepy cemetery worker and Sebastian Roche's frazzled Russian mobster. All of this adds texture to the film, a welcome distraction from the grisly central plot, which is never played as a mystery, but rather as an inevitability.

Continue reading: A Walk Among The Tombstones Review 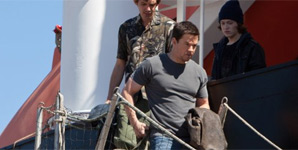