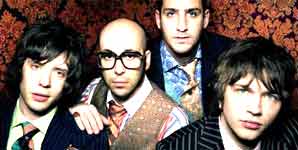 Much loved Chicago rock band OK Go have announced details of a new single, Here It Goes Again. on 18th September and is the latest song to be taken from the band’s sophomore album Oh No: a raw, manic set recorded by the noted producer Tore Johansson (Franz Ferdinand, New Order, The Cardigans etc.).
The video for the single Million Ways, released in the UK earlier this year and taken from the album, proved a worldwide phenomenon with downloads topping the 7 million mark. The video for Here it Goes Again, sees the band develop this novel approach to video making and has already seen the band break a new record with over 1.5 million downloads in the first 24 hours of being available on the internet.
Oh No was recorded in MalmÃ¶, Sweden with producer Tore Johansson (Franz Ferdinand, the Cardigans). Dave Sardy, whose production credits include work with Oasis, Nine Inch Nails, and Jet, also joined the band in the studio. The result is an album that is leaner and grittier than their acclaimed, self-titled debut, but no less exuberant or ambitious.

September dates in full are:

Tickets will be available via www.seetickets.com They are priced at Â£10, except in London where they will be Â£12.50.