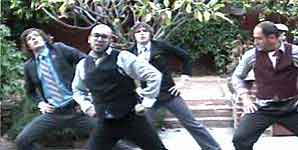 How is your day going?

It's going fine, the coffee is starting to kick in a little bit, I always forget when I do these days of interviews, the first one was at 10 and I showed up at 9:45 and got a cup of coffee, but its like you need to have a cup of coffee like a full 45 minutes before your supposed to start talking, this first interview is always like 'errrrrrrrrrâ¦â¦â¦â¦.. what's my name again?'

What are your plans for the day?
We're playing a show at a record store called Fop in Covent Garden, so that's what we're doing this afternoon and I think I might go have drinks with the Kaiser chiefs afterwards. They are friends of ours and as they're in town.

Yea, I was at your Leeds show. They came to watch you didn't they?
Yeah, they did! Ha, we had to repeat everything we said to them at Leeds because none of us remember what was said, it was one of those nights!!

How long have you actually been in the UK?
About 3 days, we did a tour here in early January, and then we went back and did a tour about a week long of the east coast, a two week tour of Canada, which should never be done in February but, I don't know what we were thinking, got ourselves stuck in 25 center meters of snow in Halifax and then we came back so we've been here since Friday and we leave tomorrow, we fly out tomorrow morning and play our show at Minneapolis tomorrow night.

I didn't realise you'd been away between the tour and this short stint!?
I wish we had stayed to be honest! Saying that Its better to be busy than the other way around, I am the most petulant awful person when I'm bored so its better to be stressed out than bored. we went over and did a couple of shows in New York city and then Boston and Providence, New Haven, Burlington Belmont, that kind of stuff then we went up to Canada and played in places I have never formally heard of like Monkton and Gwelf! Gwelf sounds like a disease that pirates get or something.
As I said, we're back over in America tomorrow, we play Minneapolis tomorrow night as I said, I don't know what has come over us but this entire winter we are doing the most frigid, inhospitable places imaginable. I mean January is not the time to be touring the UK, I mean we do January in the UK then February in Canada and now we're back to make sure we catch Minneapolis to catch before it comes above deathly cold temperatures.
What's funny is in the idle of this I started doing phone interviews on the road and noticed that they are all from cold places too, maybe its cause we made our record in Sweden or something, everyone's into the frigid side of OkGo it's the same week were stuck in two feet of snow in Halifax we did two phoners to Moscow and the next day someone in Alaska. I guess were the new poster children for coldness of something.

The records came out in America before here, did you have anytime to do some shows to promote the record?
We did about 8 months of touring in the states before here.

How long have you got left on the road?
Hmmm? About eternity! Right now we are booked solidly until the end of April and we have a few shows in May and I expect that we probably won't stop touring until the end of the summer.
We're gonna do several of the festivals this summer here and maybe a couple in America which aren't as good. There are a few good ones Coachella's great and lollapalooza is getting good again but the states are a considerably larger place so you can't just suck the entire country into a city. So they attempted to have touring festivals like the equivalent of having Glastonbury move around or something, but it doesn't really work, you just wind up with a bunch of crappy metal bands, I mean part of the problem is that American bands also sort of generally suck are American people have terrible taste in music so what they want to hear is a bunch of new metal bands. What most people see as the spice of life Americans see it as the fuel of fear!! To contradict that there are lots of great music in the states and I'm sure there are great festivals arranged here, we are actually doing a smallish festival in Texas & South by South West which is by no means smallish, it's the biggest collection of bands every year, the entire music industry turns up & it all takes place in this smallish town in Texas. Insane shit happens at SxSW last time we went our tour manager and guitar tech got arrested! They were fighting naked on the medium strip of a highway! God knows how they managed to get on it to start with but hey!! They did!!

When did you finish recording?
About a year ago actually! It's been done awhile. Tori Johansen produced it. He did all the cardigans records & the first Franz Ferdinand album. He was wonderful to work with, the reason why we wanted to work with him in the first place was because he has the uncanny ability to focus peoples sound into something unique for each band. I think the best producers can do that. if they can look at a band and their music and are able to pick out sounds that really makes the bands their own & then be able to concentrate on developing it through the record. we had 60 or so demos for this album, they were all over the place. it was a whole mixtape of our influences, there was David Bowie songs next to Fugazi next to Prince. he managed to use his ability to just take one at a time and re-record each slightly tweaking and make them all fall in line to make them fall in to line. I'm jealous of his ability! I mean, we had lots to do with the recording but I think he really helped direct us. I'd love to work with him again.

How long did you spend over in Sweden?
2 and a half months. it was last winter so it was pretty cold, I guess that's the best thing for when you're in the studio because you don't want to go out side every half hour or so. I used to live in London and I always used to wish that in the summer time I could make some form of recording bubble so I could go outside! having lived through a British winter, by the time spring arrived I was so happy to be able to go outside because it was so beautiful the idea of having to sit in my apartment writing songs just didn't appeal to me one bit! maybe create a bit of bubble studio thing going on!

I have to ask about the video for your last single?
we were just on soccer am not so long ago doing it for them actually, that was good fun! it took us 4 days to learn the dance that my sister choreographed. we were doing 8 hour days though constantly practicing. I mean, that was one benefit of having my sister do it, you don't f**k around with my sister! ha, she has this unique ability to both enrage & inspire me!

Wall paper, paisley wallpaper IS the way forward?
This is true! it's the only way forward, it's good stuff. whenever we're on the road we take pictures of good wall paper! it's quite rare when you're on the road but occasionally we find some and it's a treat. we add it all to our slide show and use it as a backdrop when we play live.

What's going to be released next?
'Do What You Want' is going to be the next release. it's been deemed the most "rock radio friendly"!!!! and there you go, I'm not sure what I would have chosen. It's a disaster has had quite a few votes too but we've gone with this.

Do you think this has been quite a nice progression on from the debut?
Oh yeah! I've been told I'm not actually allowed to say this but I will any way! I don't really like listening to our old record anymore. basically, making the first one was really fun. it was like being a kid in a candy store - it was a huge pop opus, the entire thing was totally over produced, that's how we wanted it to be, we wanted to the be gleamy and super sugary. at the time so many people were putting out self-conscious retro lo-if records and we wanted to make something like a cars record that would run as smoothly as possible. I think we kind of suffocated the music a bit when we tried to make it so grandiose and perfect I think we strangled a lot of the life out of it. The new album just kicks a lot more ass. they are more aggressive. the push and pull of the rhythm section is a lot more apparent. it's simpler but a lot more direct. when I hear it is sounds like the music I hear in my head and less like a science project. a lot less charts and graphs were required with this one!!

What's happening next?
I'd like to tell you some story about world domination or something but the reality of it is we're gonna be touring!! at this point we're booked straight through April and pretty much all of the summer. we're trying to write stuff on the road too but it's kind hard in those surroundings. Tim is trying to learn to levitate! could you imagine how cool that would be when we have the wall papers going and suddenly up Tim goes!