Review of Oh No Album by Ok Go 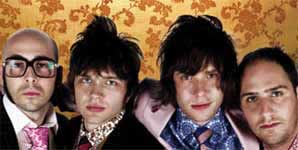 From the band that brought us hey 'Get Get Get Get Get Over It' comes this, their 2nd album, and I am quietly impressed. This album shows maturity of the band, and it's not as pop-like as get over it. I actually think on the 2nd track 'Do What You Want' Damian Kulash jnr sounds a bit like Lenny Kravitz, and the song in general sounds Kravitz like. Songs on the album to look out for are 'Do What You Want' and 'Oh Lately' it's so quiet. In fact the more I hear this album the more I like it. However with the release of Franz Ferdinand's new album other smaller, less known bands may struggle to make an impression on the music charts, and I feel that this could be the case for Ok Go.

This is a decent album, it's not going to hit the top spot and I'm not sure if it will enter the top 10 in the UK. It may be that the band have a bigger fan base state side, but there are too many bands sounding the same here right now for everyone of them to be a huge success. I would recommend this album to all those out there who follow the likes of The Killers and The Bravery, however the band and the album are just slightly below these other bands, but perhaps if they are lucky they may claim more fans with the release of this album.