Review of Here It Goes Again Single by Ok Go 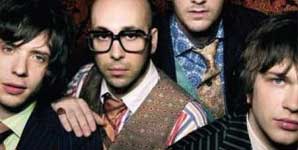 A tune of jumpy up and downy mindless rock pleasure, it's no wonder that Ok Go had no choice but to create a suitably mindless video; the band doing a dance routine on treadmills? Apparently so. And be sure not to try it at home: according to vocalist Damian Kulash, the choreography took eight weeks to perfect and a heck of a lot of bruising.

But of course when they were spending their time making the video, they were doing it for the song and 'Here It Goes Again' is the second single to be lifted from Ok Go's
second album. Compared to 'A Million Ways', it isn't quite as suave or charming but it matters not when Damian Kulash's unfathomable voice attacks the verse. An uplifting single that's too fun to be cool and as light as Kate Moss served on Ryvita.