Ok Go - Of The Blue Colour Of The Sky Album Review

Review of Ok Go's album Of The Blue Colour Of The Sky released through Capitol. 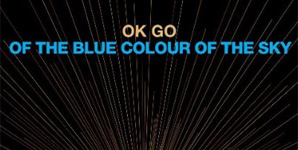 Emanating from Chicago, but latterly LA dwelling post-modern arty types OK Go release their first full length album since their video propelled 2005 offering, 'Oh No'. In the intervening four+ years the band have toured extensively, released an EP with Bonerama in aid of 'musicians displaced by hurricane Katrina', been parodied on The Simpsons, recorded a song for The Chicago Soccer Team, done a Pixies cover for a tribute album and recently played a benefit gig with Black Francis, Flea and...... (Who knew they were still around?) Love And Rockets among others.

Formed in 1998 by former Interlochen Arts Camp students Damian Kulash and Tim Nordwind, OK Go have established themselves as somewhat of a creative force aurally and visually, whether that be manifested in their oh so geek, but so very nearly chic, choice of apparel, or their innovative, multimillion viewed music video output. This time around they have enlisted the help of ex-Mercury Rev member Dave Fridman (MGMT, Flaming Lips) as producer. Originally to be titled 'The Influence of the Blue Ray of the Sunlight and of the Blue Colour of the Sky' after an 1876 book 'promoting the erroneous theory that blue light cures all ills' OK Go sensibly settled on their, slightly, shorter album title.

OK Go have already said that the album draws on influences from Prince, and, quite frankly you'd have to have been doing some serious solitary akin to a castaway island inhabiting W.W.II Japanese soldier not to recognise this from the off. It's a soulful, funk fuelled homage to the little man from Minnesota. Guitar breaks, vocal shrieks, sighs and catchy licks run through the fabric of the album binding and building the theme. There are other points of interest going on here but if you're not a fan of Sheena Easton's ex-squeeze you may find this album a struggle.

'WTF' starts the album off splendidly with a dirty bass, falsetto vocal and sexually charged energy that Mr Rogers Nelson himself would be proud to call his own. 'All Is Not Lost' combines a fine melodic tune with a harmonious Beautiful South flavoured chorus. 'Needing/Getting' melds a Yeah Yeah Yeah's guitar break with a faintly Buzzcock doused lyrical sensibility and attitude complete with a midpoint melt down.('Needing' also contains one hell of a fuzzy, threatening and gloriously creeping bass line). Elsewhere the aforementioned MGMT are evident as both influence and inspiration to the albums direction and content, as too, are OK Go's east coast cousins, The Scissor Sisters. On 'Skyscrapers', a slower tempo, moody number (released previously as a single) Damian laments that 'I stand here a penitent man', although for what we are never quite sure....... May I suggest it is the guitar riff so unashamedly lifted from Electric Six that smoulders in the background? Further into 'Of The Blue Colour Of The Sky', OK Go almost tire of their 'tribute' album and decide to move on to pastures new. There's a Beatles like quality to 'Back From Kathmandu' and a distinct french, Daft Punk/Air, flavour to the synth vocalised 'Before The Earth Was Round'.

Geek or Glam, chic or sham, you decide. Take it non too seriously, disregard the pilfering, and what you get is a creative, if not entirely original, feisty smorgasbord of funky, and, on occasion, furtive tunes. OK Go are set to tour the UK from January to help promote their new baby. Expect extravagance, colour, performance and panache to accompany a vibrant musical flight of fancy.