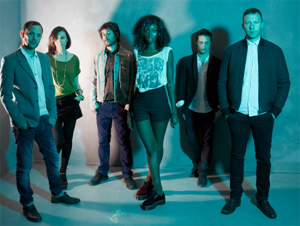 In recent years Oi Va Voi have travelled more European countries than most travel journalists, supplying them with a multi-cultural and diverse sound and enforcing a positive outlook on life projected through their inspiring lyrics.

With Klezmer influences and clever instrumentation, it is no surprise the dominate success the band have had has been in Eastern European countries (particularly Turkey) whilst the band continue to make an impact in their home country, England, with a one off date at London's Hackney Round Chapel and the recording of their new album, due in early 2014.

CM: Welcome home. How are you?
David: Thank you, yes, I'm well thanks.

Unique musical ensemble Oi Va Voi have released a wonderful acoustic session video of their new, previously unreleased track 'Strangers' ahead of the release of their upcoming new album - details of which they've yet to announce.

The clip shows the band as a whole performing a raw, riveting version of the track with instruments including a trumpet, a clarinet, drums, a guitar, a double bass and a violin. They are just as intriguing to watch as they are to hear and their perfect orchestral cohesion is absolutely effortless. The effect of the range of instruments makes the genre difficult to place; 'Strangers' is laced with melancholy folk with a hint of sweet-sounding jazz while still retaining an up-to-date modern pop feeling with the sensational vocals.

Oi Va Voi - whose name comes from the Yiddish exclamation 'Oh, dear!' - have recently come off their world tour promoting their last album 'Travelling the Face of the Globe' and now they are back in the UK playing a one off gig at the Hackney Round Chapel in London on July 18th 2013. It looks to be a busy night for the band with them promising some of their older classics while also offering some brand new material that will appear on their upcoming fifth studio album.