By Andrew Lockwood in Music Reviews on 23 November 2011

Oh Minnows, indeed, Oh Minnows. Where to start? Well they're not a band, they're a person. A person by the name of Chris Steele-Nicholson, he formerly of the group Semifinalists. Now happier to swim in his own pond, 'For Shadows' represents Chris's debut solo album. 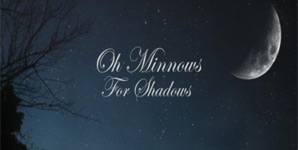 Former film student Chris Steele-Nicholson formed Oh Minnows in 2009, shortly after the disbandment of cult indie trio Semifinalists. In the same year, Oh Minnows released their first EP, Might, in June. They cite their influences as electronic music composer Delia Derbyshire and The Beatles.

The new album For Shadows was recorded from the latter half of 2009 to the start of 2010, in various locations in America: Chicago, San Francisco and North Carolina. While recording the album, Chris mentioned that inspiration came from working on a film project with a friend.

Oh Minnow's latest single, You'll Never Know Us, comes from his upcoming debut album For Shadows, which will be released on July 25th 2011 through Young and Lost Club.