Octavia Spencer wants to become a producer and an ''activist'' following her Academy Award win for Best Supporting Actress. 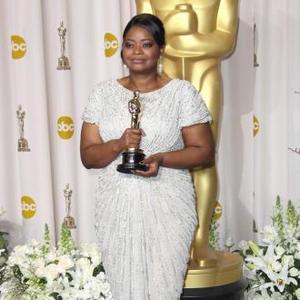 The 39-year-old actress won the Best Supporting Actress Oscar for her turn as maid Minny Jackson in Tate Taylor's 'The Help' last night (26.02.12), and she reveals she could turn her back on acting and turn to working behind the scenes on movies.

She said: ''I don't have any role that I want to play. I want to be a producer. I want to be an activist. I was to be pro-active in bringing about work for men, women, boys, girls, everybody who is good at what they do and deserve a shot.''

Octavia - who cried on stage when she accepted the award - admits she was ''humbled'' by the accolade and hopes she could be a ''beacon of hope'' to aspiring actresses.

She said backstage: ''I'm very humbled because I get to stand here and accept this award and I haven't really done anything.

''I hope that in some way I can be some kind of beacon of hope, especially am I am not the typical Hollywood beauty.''

Octavia will next be filming a role in an as-yet-untitled Diablo Cody project and will also work on 'Snow Piercer'.