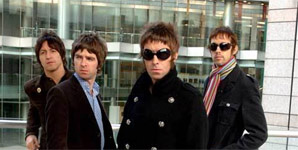 Noel Gallagher talks to the press on the eve of Oasis's Wembley Arena gig. We were there and this is what happened.

The conference starts off with an announcement about a new stadium tour for next summer (09).

The tour will begin with two dates at Heaton Park in Manchester in June, closing with two Wembley Stadium shows.

The band, currently number one in the UK album charts with Dig Out Your Soul, will also perform at venues in Sunderland, Cardiff, Edinburgh and Dublin.

When asked about the stadium tour Noel Gallagher replied.

'I can't see Manchester City getting here next year, (Wembley stadium) so we're representing them at all UK venues'.

The last person to play there, (Heaton Park, Manchester) was the Pope in 1982! It seemed a shame to let it stay stagnant.

Did you support him? (The Pope)
'I supported him, just doing stand-up. 45 minutes of religious gags'.

The only other venues available were Man United but nah!

Why Kasabian and Enemy as support for the upcoming Summer tour 2009?

'We toured with Kasabian in the U.S and since then, we have become quite close. We always sadi that when we did the Super-gigs, then we would give them first option.
The Enemy, I liked since their first single. These gigs will be the gigs of next year, if not the decade! I'll just be glad to get a ticket!

It never felt daunting to play to 40,000 people. We'd think 'all these people are here to hear me play guitar'. It doesn't get any better than that. What's the worst that could happen? You could sound shit. Life's to be lived and enjoyed, otherwise just stick to playing the Astoria.

What do you think of the latest crop of the X-Factor?

Who would deny kids the chance to better themselves? It's not about some kid from Bradford singig in an American accent. It's about who's got the biggest sob story this year. It's a bit shite really, to be honest. 'Oh, my fucking god, my cat died, and his outstretched paw was pointing to an X, so I'm going to sing What's New Pussycat! Do us a fucking favour, get a proper job!
When Simon Cowell says, it's all about you, it's not, it's about him!(Simon Cowell)

Do you worry about the future of the music industry?

I don't give a shit about the industry. Down-sizing it is a good thing. I don't think its hit rock-bottom yet. If anything, records are cheaper, can't argue with that can ya?

Are you tempted to headline 'Glastonbury' next year?

I think, 'Michael Eavis' will shit himself when he finds out. (About the tour) Would you go to Glastonbury? (He asks the interviewer)

'I've always said Glastonbury's great to be at, but not to play at. There's not enough speakers and it's too quiet.' '[The stadium tour] is where it's at.'

Do you have any rituals before you go on stage?
No, (laughs) we saw 'Travis' do it, get in a group hug, and we thought, 'What the fuck are they doing?' We never mention it, before or after.

What can you tell us about the upcoming BBC Proms performance?
Yes, we're doing it with the crouch-end choir which is a 150 piece orchestra, but only 50 or so can get on the stage. I've rehearsed 7 songs in a kitchen in Muswell Hill, you should see the size of this kitchen. Oasis songs are like hymns, in parts. The orchestra are allowed to wear their own clothes. I'm really looking forward to it.

Are you excited about it?
Its one more venue off the list, we haven't played in Camden before.