Live review of Oasis at Sheffield Arena on October 11th 2008. 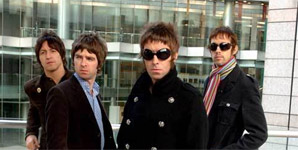 Ever since the anti-climatic 'Be Here Now' record of 1997, there seems to have been a cycle of a release that Noel Gallagher claims to be Oasis' best ever material, followed by a lukewarm reaction. Eleven years on and the band are promoting 'Dig Out Your Soul', their seventh studio album.

Labelled as a people's band when they first burst into consciousness, 'Rock'n'Roll Star' was a statement of escapist ambition that tonight puts every member of the audience into the protagonist position being occupied by the ever-charismatic Liam Gallagher. Sounding as good as he ever has, he is accompanied by a capacity crowd in chanting through the likes of 'Cigarettes And Alcohol', 'Wonderwall' and the fantastic inclusion of 'Slide Away'. Many detractors point to the strength of the band's older catalogue as the reason for their continued success, and whilst few could argue Oasis have produced a classic album in the last decade, the energy that accompanies 'Lyla' and swaying for 'Songbird' are examples of how with each release they've added to what is an undeniably anthem-filled repertoire. In fact so spoilt for choice for songs are the band that 'Live Forever' is omitted without the feeling that something was missing from the night.

So how do the new songs sit along with the established order? Well, their appearance marks a noticeable downturn in the volume of the crowd, with even recent single 'The Shock Of The Lightning' not being a full sing-a-long - though it provides a humorous moment when upon spotting glow sticks Liam remarks 'this isn't the f**kin' Klaxons'. Perhaps the groove-based approach and lack of choruses makes it harder for the songs to have immediate impact, though 'I'm Outta Time' could prove to be a future favourite while 'The Rapture' certainly packs a punch.

Showing no ill-affects from his assault in Canada, Gallagher senior is also in fine-form this evening, no more so on an acoustic re-working of 'Don't Look Back In Anger', which is worth the admission-price alone. Before it's performance he reveals it was at this very venue nearly 14 years ago that the track was first performed, though it's a safe bet that tonight's reaction is considerably louder than it was all those years ago. Flawless until this point, the set is ended with a cover of The Beatles' 'I Am the Walrus', but a comedic fluffed intro sees it attempted a second time before the crowd and band thank one another for a top night. There's no doubt that they'll continued to be slated in some corners, but witness a night like this and you see that the boys from Burnage are a band for a generation and still very much a force to be reckoned with on stage.