Time flies. It certainly does. The first anniversary since Noel called time on the most infamous British band of the last two decades is nearly upon us. Three weeks on from its release, and having debuted at no.1, 'Time Flies' has now slipped down to 5th in the Top 40, although with performers selling well in the post Glastonbury week, it may jump back up come Sunday's chart. 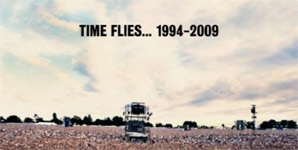 It goes without saying that Singles Collections, or Best Of's, can define a band's career in the following decades. Oasis, ever the egoists, have both. 'Stop The Clocks' and 'Time Flies' unite their material against all the critics who have tried, and failed, to define them as merely a two album band.

'Sunday Morning Call' is the only single of their 27 releases not listed, though it does appear as a hidden track at the end of disc 2. It didn't feature in the postcard collection either. Of the other 26, Liam penned only two, 'Songbird' and 'I'm Outta Time', compared to Noel's 24 (Neil Innes is also credited on 'Whatever'). So far, neither Gallagher brother has attempted to release any form of 'solo' material, although, if rumours are to be believed, Liam's new project 'Beady Eye' are about ready to show their hand. Given the ratio of Liam:Noel material forming the Oasis legacy, Liam's claim that Noel's material 'will be good but ours will be better,' seems as likely as a John Pantsil penalty. Then again, he and Andy Bell (who apparently thinks he's Jimi Hendrix at the minute) could surprise us all.

Whilst there is no formal split, much of the pre-2000 material falls on disc one whereas disc two takes care of the three offerings each from 'Don't Believe The Truth' (2005) and 'Dig Out Your Soul' (2008).

Debut single 'Supersonic' was the only choice for opener, that initial drum beat and hi-hat evoking memories of its 1994 debut, even today. 'Roll With It,' coming next as the tune that arguably broke Oasis out of the counter-culture and into the mainstream. That chart battle with Albarn et al. did as much for both bands careers as the ultimately fatal dispute between Tupac Shakur and Biggie Smalls.
Another drum-led classic, 'Live Forever,' follows as the band's unofficial signature. Stop there and it's worth the admission price alone but the anthems, and they are anthems - terrace or otherwise - just keep on coming.

The best pairings are perhaps 'The Shock of The Lightning' pulsating against the backdrop of fair-weather favourite 'Little By Little' or the snarl 'D'You Know What I Mean?' disseminating into 'Lyla,' which, like any fine wine, has really aged well.

In all honesty, quite who is buying this collection is a bit of a mystery. Any fan worth his curry sauce was buying their albums right up until the end, or at least stopped where they wanted to stop. Even collectors have long since dabbled in the back catalogue during a HMV sale. Though you have to credit the fan who has every album and still wants more, or simply couldn't be arsed to make the playlist themselves.

There are no surprises, you know what's coming but perhaps you forgot, for a time at least, how good it was.