Oasis - The Shock Of The Lightning Single Review

Review of The Shock Of The Lightning Single by Oasis

Read a review of Oasis' new single 'The Shock Of The Lightning' released on Big Brother. 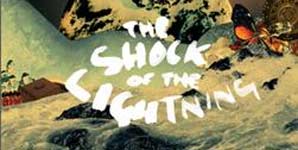 There aren't many bands around that after fourteen years, six albums and two-dozen singles can still create a mad rush of excitement whenever they announce the release of their next record. The Gallagher brothers may have spent the last twelve months out of the media spotlight but that time hasn't been spent relaxing or resting on their laurels. With album number seven, 'Dig Out Your Soul' imminent and a string of arena shows booked for the remainder of the year, it seems the Oasis machine is back in full swing, despite the odd Canadian altercation.

'The Shock Of The Lightning' then. Don't necessarily believe the hype. It isn't their best four minutes since 'Definitely Maybe' (that honour surely belongs to 'The Hindu Times', no?) and thankfully, is by no means their worst either. It's not going to change too many people's opinions on Oasis whether they are good or bad, and certainly makes no attempt at reinventing their sound either. As with pretty much every record they've made since the execrable 'Standing On The Shoulder Of Giants' was despatched and promptly cast aside quicker than you can say "Bad move, Noel.", Oasis have stuck to a formula that attracted their loyal fan base in the first place; no holds barred rock and roll that wears its influences proudly on its sleeves, but first and foremost, sounds unmistakeably like an Oasis record should - loud, brash, and supremely arrogant in its unifying defiance of any criticism it will no doubt receive from their many detractors.

Sure there's the odd Beatles reference in the slightly cheesy lyrics ("Love is a litany/a magical mystery.") that's perhaps best skated over, but musically 'The Shock Of The Lightning' sounds taut and uncompromising, from its incessant riff borrowed from? And The Mysterians '96 Tears' to the fact each individual member seems to have been given a license to express themselves here, and not just the two obvious focal points of the band.

The remixed b-side of 'Falling Down' is perhaps the most striking departure for Oasis, even if their choice of The Chemical Brothers to do the honours seems a little outdated, given their less than prolific and hardly cutting edge status this decade. Nevertheless, the rolling beats and warped strings coupled with Noel Gallagher's vocal make this the missing link between 'Setting Sun' and 'Let Forever Be' that (maybe) both parties have been striving for all this time.

Business as usual then, but in all honesty, did anyone really expect anything else?