Review of Dig Out Your Soul Album by Oasis

Album review of Dig Out Your Soul by Oasis released through Big Brother Recordings. 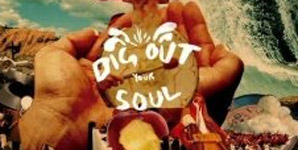 The brothers Gallagher and their various incarnations of Oasis have had something of a love-hate relationship not only with each other, but also with various sections of their audience, particularly the critics. For every well-earned - and some not - plaudit that has been laid at their feet over the past decade-and-a-half, there's also many who feel that their rise to and seemingly omnipresent status as the UK's premiere rock band has coincided with a gradual decline in new home grown talent with the ambition and spark to ignite a new generation of artists like their forbearing heroes have since their emergence at the outset of Britpop.

Let's look at the facts, or to put not to fine a point on it, the legacy that Oasis have created thus far. Two era defining records aside, the cynics have a point in that each and every one of their subsequent releases after 1995's '(What's The Story) Morning Glory' has bordered on the patchy side to say the least, occasionally throwing up the odd collection that could only be described as ill-advised ('Be Here Now') or even totally unlistenable ('Standing On The Shoulder Of Giants') along the way. Add to that the endless conveyor belt of dreary lad-rock bands that have formed in their trail and all of a sudden the Oasis phenomenon doesn't look too healthy.

Of course what has been their saving grace over these years - loyal fanbase aside - is that when they've been good they've been VERY GOOD indeed, a fact not lost on anyone fortunate enough to see them on their most recent tour for 2005's 'Don't Believe The Truth', a year-long trawl that showcased arguably the most musically proficient Oasis line-up and taut live performances to date. While some may have questioned the decision to relieve Paul 'Guigsy' McGuigan and Paul 'Bonehead' Arthurs of their duties on guitar and bass many years ago, citing the fact the whole 'gang mentality' was lost therefore changing the dynamics of the band forevermore, the decision to replace them with Gem Archer and Andy Bell has proved something of a masterstroke not only by way of the fact barely a bum note passes through rehearsal let alone anywhere else, but the number of talented songwriters in the band now stands at three as opposed to one.

The third, without question of course, is elder statesman Noel Gallagher, and definitely not younger sibling Liam. As a front man and focal point for the band; a generation even, his persona and mannerisms aren't ever in doubt. When it comes to penning a great lyric however, he's never really cut the mustard, and the three attempts at doing so here don't alter that fact. The closing 'Soldier On' is by far the best of the trio, trite couplets like 'Hold the line/Friend of mine/Sing a song/Soldier on' saved by possibly the most superior musical arrangement on the whole album, billowing guitars drowning out Gallagher junior's vocal near the end in epic fashion. Of the other two, 'Ain't Got Nothin'' is forgettable plod-rock fodder while 'I'm Outta Time', for all its obvious sentimentality as his first real attempt at writing a heartfelt ballad, just falls on the wrong side of sick bucket territory not helped by the sample of John Lennon that engulfs the song's coda towards the end.

Like all of their recent long players, 'Dig Out Your Soul' suffers from a lack of consistency throughout. At its best, such as on 'The Turning' or psychedelic charmer 'Falling Down', Oasis sound like a band only too happy to cast off the shackles and reinvent themselves on the former as a soulful 21st Century Faces, while the latter has an almost anglo-Adam Green-like feel to it, such is Noel Gallagher's pensive, studied vocal. First single 'The Shock Of The Lightning' is the swaggering Oasis of old, a 12 bar juggernaut of fire that despite referencing The Beatles lyrically, stands up unashamedly alongside their most revered works with bombast. Andy Bell's sole contribution to 'Dig Out Your Soul' meanwhile, the reverb heavy glam pomp of 'The Nature Of Reality', is an expansion of Oasis' horizons many commentators expected them to take at least a decade ago. Nevertheless, the end result here suggests it was better late than never.

Sadly though, there's also too much filler here that while not excruciating to listen to, beggars the question as to why anyone would play 'Dig Out Your Soul' as a whole album in front of the aforementioned 'Definitely Maybe', '.Morning Glory' or even vastly underrated b-sides and rarities collection 'The Masterplan'. Although its merits outweigh the negatives - just, 'Dig Out Your Soul' feels more like a stopgap than a re-evaluated statement of greatness, and maybe now's the time, seven albums and fifteen years into their career, Oasis need to sit and down and think about whether recording another album is ever going to enhance a reputation that was already cemented a long, long time ago.