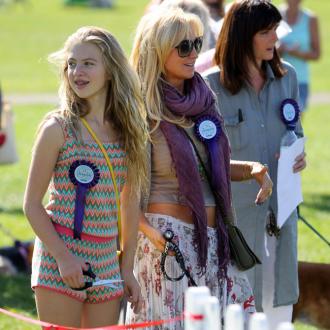 Noel Gallagher's daughter has secured her first job as a TV presenter.

The 46-year-old rocker's 14-year-old daughter Anaïs, from his first marriage to interior designer Meg Matthews, has been hired by UK children's channel CBBC to present the 'Friday Download' series, giving advice on fashion and style to viewers.

A source told The Sun newspaper: ''Bosses see great potential in Anaïs. She auditioned and was an instant hit.

''Anaïs is a quick learner and very natural on screen. Of, course her connections played a part.''

The aspiring TV star will join a number of other young presenters on the show, including 18-year-old singer Dionne Bromfield, who will return for a second series.

Anaïs mother is said to be encouraging her daughter to pursue a career in television, and CBBC are reportedly keen to help the youngster to become a regular face on the network.

The sourced added: ''All going well they could develop her within the company as a future star.

Although Anaïs has no previous television experience, the young blonde has worked as a presenter for fashion store Claire's Accessories' website, which involved filming alongside 'Wild Heart' hitmakers The Vamps.