Gallagher: 'Holmes Demanded I Cut Her From Website Video' 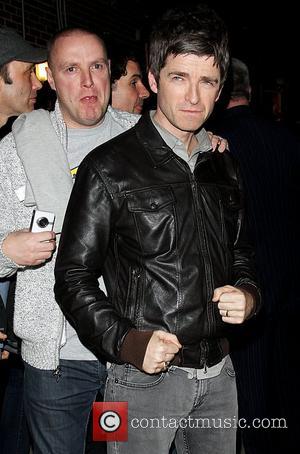 Noel Gallagher was left flabbergasted backstage at the Late Show With David Letterman earlier this week (beg07Nov11) when actress Katie Holmes asked to be deleted from video footage the rocker's pal shot.
The former Oasis star was about to make his debut as a solo artist on Letterman's late-night show at the Ed Sullivan Theatre in New York when he had an unexpected request from a fellow guest on the show.
In a post on his blog, he writes, "We literally bumped into that top Scientologist Katie Holmes on the way into the studio. We came out of the lift (elevator) and Bang, there she was.
"Now at this point my mate, and friend of the stars, Scully was doing a bit of filming for my website and managed to capture the moment. She did look a bit miffed (annoyed) at the various North-West accents and some vigorous handshaking, but there was no need to send one of her people over to demand the video be deleted!!!! Un-f**kin'-believable."
But Gallagher's appearance on the programme wasn't all unpleasant - he got to meet heroes Steve Martin and ZZ Top star Billy Gibbons.
The rocker writes, "Our dressing room was next door to none other than the legendary comedian Steve Martin... He only stuck his head round the door to say hello! What an honour!!! We talked banjo and he had a bit of banter with the lads. Top, top man. Funny as f**k!!
"As showtime approached we got a little visit from that fella Billy Gibbons from that band Zz Top. Another top little dude."
Gallagher is currently on his first solo tour on North America. His appearance on The Late Show aired on Thursday (10Nov11).