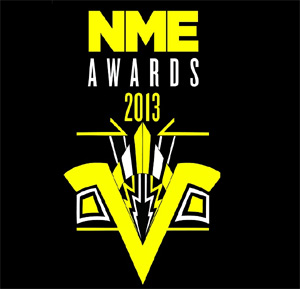 The Rolling Stones celebrated a double victory tonight at the annual NME Awards held at London's Troxy, they were awarded Best Live Band and Best Music Film for 'Crossfire Hurricane', Ronnie Wood was in attendance to pick up the two awards.  Other big winners on the night included Biffy Clyro, Florence Welch, The Killers and Palma Violets. Ove r 10 million votes were cast by NME readers making 2013 the biggest NME Awards to date.

Mike Williams, editor of NME, said: "It's been an unbelievable night and one hell of a party, and the only thing left to say is thanks to everyone who voted and all the amazing artists who performed on the night and were nominated in all the categories. I don't think there's ever been a stronger and more diverse list of nominees, so all the winners should be insanely proud to have come out on top. The NME Awards remains the most rock'n'roll event of the year, and this year has been one of the finest in NME's proud 60 year history. Onwards and upwards for 2014!"

Hosted this year by comedian Russell Kane, the NME Awards is renowned as one of the most important and influential nights in the music calendar, and 2013 did not disappoint, as tastemakers and the biggest names in music took to the Red Carpet for the glittering awards ceremony.

Rockers Biffy Clyro opened the show with mind blowing performances of 'The Captain' and 'Victory Over The Sun' before picking up the coveted award for Best British Band, beating off tough competition from Kasabian, The Maccabees, Arctic Monkeys, The Vaccines and The Cribs.  The prestigious Best Solo Artist award went to Florence Welch, who also picked up the award for Best Dancefloor Anthem for her collaboration with Calvin Harris on 'Sweet Nothing'.

The title of Best International Band was awarded to The Killers, beating the likes of Foo Fighters and The Black Keys, while Paul Weller presented London indie group Palma Violets with the award for Best New Band. The Maccabees picked up Best Album for the critically-acclaimed 'Given to The Wild', and Foals' hit single 'Inhaler' was awarded Best Track. The band then treated crowds to an incredible live performance of the track.

Two of the most stylish men in music, Paul Weller and Miles Kane took to the stage to perform brand new track 'You're Gonna Get It', co-written for Miles Kane's forthcoming album.

The Teenage Cancer Trust Outstanding Contribution To Music was awarded to The Cribs, who performed 'Mirror Kissers' a track that was voted for by fans via NME.com.

The evening came to a climax with roaring applause when Smiths guitarist and all round legend Johnny Marr was awarded the title of Godlike Genius, presented to him by Rolling Stones guitarist Ronnie Rood. Marr commented: "I think it's serious and funny and sweet and very rocking to get the Godlike Genius Award.  I'm looking forward to being lazy for the rest of my life."

He closed the night to a standing ovation performing a five-song set joined by Ronnie Wood on guitar and vocals from The Vaccines frontman Justin Young.

Other winners on the night were Blur who won Best Reissue for '21', Artic Monkeys 'R U Mine' won the award for Best Music Video and the Philip Hall Radar Award went to Child Of Lov.

The only way for One Direction was down as the group were awarded the dreaded title of Worst Band, while Harry Styles won Villain Of The Year beating David Cameron and 'Gangam Style' songwriter Psy. Barack Obama was named Hero Of The Year.

One of the UK's proudest moments, the Olympics Opening Ceremony was awarded Music Moment Of The Year. The mighty Reading & Leeds went away with Best Festival while Best Small Festival went to Festival No.6.