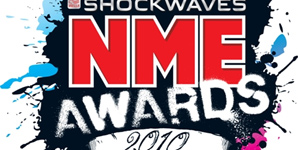 Early February is the time of the NME Tour; it's kind of like the first big gig of the year. Normally it is a showcase of new up and coming bands, the likes of The Killers, Bloc Party, Arctic Monkeys and Maximo Park have been here and have propelled to greater things. It seems like this year is slightly different as headliners The Maccabees are old hat with the release of two albums already, but it's a tour they just had to do.

First up is The Drums originally from Florida, up sticks and moved to Brooklyn, New York where it is all happening. Luckily however we get into the venue earlier than they are scheduled to come on. The Drums are on ten minutes earlier and we didn't miss it. These guys have something special and with their first Single 'Let's Go Surfing' the crowed are buzzing, this is what they have been waiting for. The Drums also bang out what will be their next Single 'Best Friend' which was described by vocalist Jonathan Pierce as an emotional track. Unlike The Killers these guys didn't headline the tour but at the same time The Drums could have what it takes to be as big as them, as long as the cheesy moves on stage are stopped that it. At one point it was thought that Bez had joined The Drums.

The highlight of the night has most certainly got to go to The Big Pink, from the entrance to the final chord being played. Smoke streams down around the stage and then 'I Wanna Get High' by Cypress Hill starts blasting out and the band appear. Straight away they hit you with this baseline with 'To Young To Love'. The Big Pink play a mixed set one set up for the audience. 'Velvet' and 'Dominos' have the crowed pleading for more, but that is how The Big Pink leave this Nottingham crowed, hanging!! It's just a real shame that the sound wasn't cranked up; this is definitely a band that need to have the sound at it upmost.

Bombay Bicycle Club has been given all the hype and is the next big thing, but somehow it just didn't fit into this night. Maybe it was just them; they played a decent set with 'Always Like This Began' seemingly being the highlight of the set.