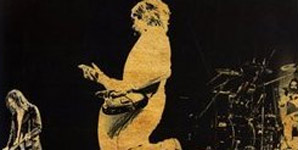 Perhaps one of the most bootlegged performances in history, Nirvana’s appearance at the Reading Festival in 1992 finally gets an official release. The band’s popularity had soared on the back of the previous year’s seminal ‘Nevermind’ album, but it was also a time when the trio were dogged by tabloid rumours – something that they would address during the set.

Those without the knowledge of the circumstances at the time could find the opening of the show rather bewildering as Kurt Cobain is wheeled on stage in a surgery gown before collapsing whilst adorned by a blonde wig. A reference to his stint in rehab, it leads into a ferocious opening of ‘Breed’ and ‘Drain You’, which is particularly well received. There’s also a random man dancing on stage who receives no recognition and it is a good 20 minutes in before a word is spoken to the audience. These brief occasions of respite allow the band to deny rumours of a split and also see Krist Novoselic display his potential as a stand-up comedian alongside Dave Grohl’s comic-timing drum roll. Cobain’s interaction is somewhat more limited, but he does dedicate ‘All Apologies’ to Courtney Love and his daughter, a song that is one of three to be released years later on ‘In Utero’. The vast majority of the set though is taken from ‘Nevermind’, with highlights being ‘In Bloom’, ‘Come As You Are’ and ‘Lithium’.

That ‘Smells Like Teen Spirit’ doesn’t standout as a moment in the performance comes down to the sheer power that the trio transmit throughout. Teased in, it is one of a few occasions that the band make notable mistakes, but also show you don’t have to be perfect to impress. Unfortunately this isn’t something that the DVD always does, as there is a distinct lack of sense of occasion, particularly when you consider that many consider this to be a pinnacle of Nirvana’s career. Granted the lighting and stage shows may not have been then what we have now, but the sheer lack of crowd shots means there is little impression of how many people were in attendance and the buzz of excitement. Only the roars that greet and applaud every track give an indication that this isn’t a studio performance and unfortunately this lets the release down. Still, for a generation of fans who will never see Kurt Cobain perform, this is as good a documentation as any of what an impressive live prospect his band were.