Review of In Utero: 20th Anniversary Edition Album by Nirvana

In a recent NPR interview, Dave Grohl described the different methods used to record 'Nevermind' and 'In Utero'. Butch Vig had laboured over multiple takes for the former to produce an album that would define a generation. On the latter, Steve Albini had encouraged Cobain, Grohl and Novoselic to record songs in one take if possible, and to avoid overdubs. The result was a more abrasive set of recordings and a more accurate reflection of Nirvana's power on stage. The 20th anniversary edition of 'In Utero' attempts to restore that vision, by providing an alternative view of what turned out to be Cobain's final studio statement. While not quite as exhaustive as the anniversary edition of 'Nevermind', in many ways 'In Utero' gains more from this treatment than its predecessor did. 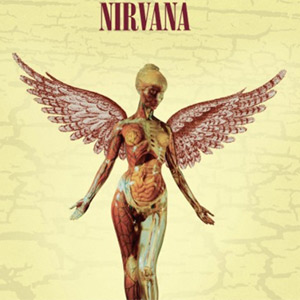 Recorded in two weeks at Pachyderm Studios in Minnesota during February of 1993, 'In Utero' was a reaction to the overwhelming popularity of 'Nevermind'. Producer Steve Albini set the band a simple challenge: "bang a record out in a couple of days, with high quality, but 'minimal' production and no interference from the front office bulletheads." Indeed, Albini's full letter to the band can be found in the liner notes for this re-issue; as a blueprint for the record, it makes fascinating reading. The anticipation of record company pressure and an unspoken obligation to Nirvana's burgeoning audience led to some changes from that original vision, though. Scott Litt who'd been working with R.E.M. was called in to overhaul the likes of 'Pennyroyal Tea', 'Heart Shaped Box' and 'All Apologies'. The album that eventually emerged was therefore 90% of the Albini mixes with additions like double tracked vocals thrown in for good measure. For the first time, then, this anniversary edition presents all the options that were considered, allowing the full set of Albini tracks to see the light of day.

They are admittedly more visceral and arresting, but that's not why this edition of 'In Utero' is indispensable to anyone that's ever engaged with the record. Albini, Grohl and Novoselic have re-entered the studio and remixed the album from scratch using the original tape sources. It may sound like overkill, but it really makes a difference. The 2013 version of 'In Utero' utilises unheard guitar tracks ('Frances Farmer Will Have Her Revenge On Seattle' springs to mind), alternate vocal takes and eliminates some of the studio polish that cluttered up the original mix. 'Dumb', for example, sounds even more stripped back and heartfelt, and while there's still cello to be found, it's far less obtrusive. While it obviously doesn't have the input of Cobain, for all intents and purposes, this is the definitive mix of 'In Utero'. It's in no way superfluous and doesn't cause you to play a never-ending game of spot the difference. Instead, it presents a record that sounds substantially different, and all the better for it.

The archives have also been mined for all the complimentary tracks to sit alongside the two versions of 'In Utero' you get in this package. So there are demo recordings with incomplete lyrics to illustrate the genesis of the material. In addition, you get the contemporaneous B-sides and non-album tracks. Grohl composition 'Marigold' makes two appearances with a demo version that's worth it just for his whispered "Bastard!" at the start. The inclusion of 'Sappy' is also welcome, it's a song that sits well here, despite its potted history having been played live since at least 1990. It's also noticeable that the sound quality on the demos is far higher than on similar material on previous Nirvana releases. 'Forgotten Tune' and 'Jam' remain instrumental curios, but at least they sound great.

The Super Deluxe box set is rounded off with the CD/DVD combo of Live & Loud from December 1993. Recorded just four months before his suicide, it revisits the entire Nirvana back catalogue, and serves as a fitting reminder of Cobain's talents as a songwriter and front man. Overall, the music presented on this anniversary edition of 'In Utero' is a comprehensive deconstruction of the album, with the liner notes putting it all into context. However, it also succeeds in shedding new light on the material by allowing Steve Albini the opportunity to finish a job he started twenty years ago. If there's any criticism to be made, it's that his 2013 mix isn't available as a stand-alone release. But in the digital age, there seems little motivation for the record company to do so. It may not have quite defined a generation in the same way as 'Nevermind'. But 'In Utero' sounds better with age and is well worth revisiting as this impressive release demonstrates.